Sonora Desert Museum is located in the U.S., Arizona.  It can be reached from the capital of Arizona, Tucson for half an hour. This museum contains not only a museum, but also a botanical garden and a zoo. You can make walking, during which tourists explore the unique nature of the south-western United States. The Americans like to have a vacation with children in this area. The same museum is valued by foreign tourists. During fifty years of its existence the museum was visited by millions of travelers.

Arizona has a mild and sunny winter. The temperature in winter is about zero degrees Celsius (32 F). There are about 300 clear sunny days a year, and the rainfall is extremely rare.

The museum has a section dedicated entirely to insect pollinators, such as bees, butterflies, bumble bees, hummingbirds and other living organisms. If you look in the museum guide, you can read a note about the fact that one-third of all food, produced in the United States, is made with the help of these animals. As well, they provide most of the existence of wild plants, as well as they help to save biodiversity on our planet. In the “Bees” department it has been reported that the population of bees, as well as other species of pollinators in the United States decline each year. Up to now we do not know the reason why we lose approximately 30% of all bee colonies a year. The continuing decline in the number of these insects is a major concern of scientists, beekeepers, owners of the food industry and agribusiness. Making the tour of the museum you can find comprehensive information regarding beekeeping in America. Rural residents are members of the national campaign for the protection of wild bees and other pollinating insects. If  you see artificial bee houses, consisting of bars with holes of different diameters in a garden or flower bed, then the owner is directly related to the campaign of insect protection. Many of these houses are occupied by bees. In the gift shop you can buy beautiful photographs with a description of pollinating insects, as well as advice for their protection and attraction. Since the Sonoran Desert plants are in a state of sleep and do not bloom in January, you can not meet wild bees, but you can look at the most famous honey plant in the area, namely the saguaro cactus. 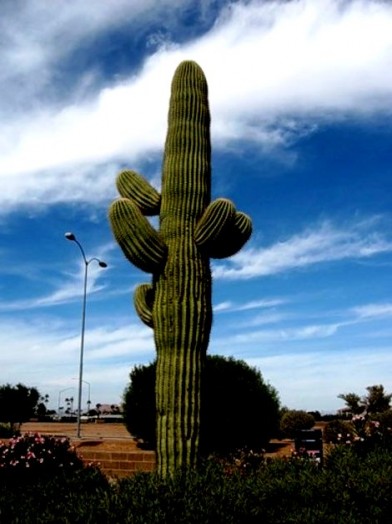 This is a quite rare plant with limited distribution area, it can be found only in Arizona and neighboring states – California and Mexico. The plant has a narrow area of distribution because it does not tolerate even the slightest frost and waterlogging. Saguaro can be found on mountain slopes and hills. Its place of growing is similar to “forest”, devoid of shade, where each cactus is located at a distance of a few tens of meters from each other. It is difficult to survive alone in the wilderness. Cactus roots are in the form of a disc with a diameter of 20 meters, with depth about half a meter. This helps the plant to stock plenty of moisture during the short rains. After the rain the barrel, which has a spongy structure, can keep about one thousand liters of water. This allows it to go through a long period without rain. Barrel cactus resembles bamboo rods inside, and looks like a complicated engineering design. Due to this structure saguaro gets more flexibility and stability. Cactus grows very slowly, for example, for fifty years it grows only for 20-50 centimeters. When the plant is about 70 years old, it blooms the first time. On the seventh decade the cactus has so-called “hands”, the number of which can be up to forty pieces, but usually there are only three of them. If the environment is good, it reaches a height of 15 meters, but the average height is about 10 meters. There are cases when the cactus with the water, contained in it, weighs up to 15 tons. Flowering time of saguaro usually occurs in May and April. It has on its “hands” up to thousands of huge yellow flowers. They have a diameter of 8-10 cm (4”), and the smell resembles ripe melon flavor. Usually they have four flowers simultaneously, most often they are disclosed in the evening, and close to the middle of the next day. Each flower contains about 5 milliliters of flower nectar.

Saguaro can give a large amount of pollen. Bee can bring 12 fully loaded with pollen sacs from one flower. Pollen from the flowers of a cactus, as well as other plants of polliniferous Sonora, contains large amounts of antioxidants, which have been scientifically validated by laboratories of the Ministry of Agriculture of the United States in 2007. Unfortunately, bees can not take all the pollen and nectar of flowers saguaro, because there are a large number of other animals, in particular, bats and white doves. Honey, made by bees from the nectar of saguaro, is valued much higher than other cactus honey. Its distinctive features are low acidity, high resistance to crystallization, as well as yellow color and very pleasant aroma. 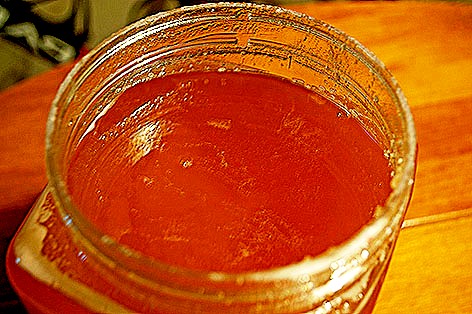 Also, bees can produce honey from sweet pulp of the fruit of this fern, it is very rare and has a bright red color.

Sometimes you can see houses of woodpeckers in the trunks. Quite often you can see a round hole – the entrance to the nest. Nests, abandoned by woodpeckers, are occupied by other birds, rodents and insects, as well as the wild honey bees. This place is very advantageous for dwelling, since, in spite of hot desert, the temperature inside the cactus does not exceed 30 degrees Celsius (86 F).