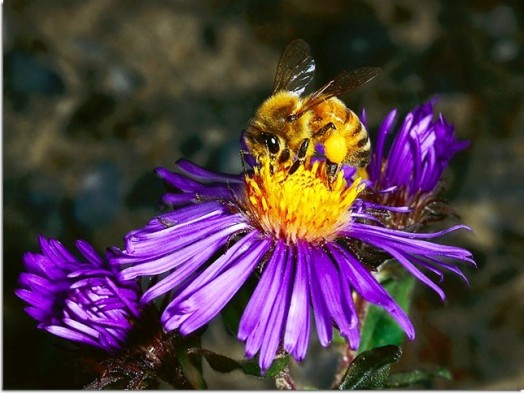 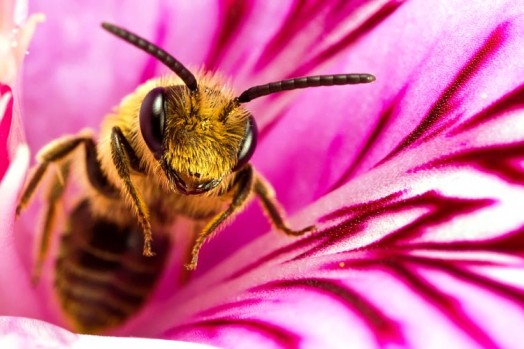 – The first polymer, manufactured on earth, was beeswax. Wax contains more than 300 substances, esters (about 70 – 75%), free fatty acids (about 13 – 15%), carbohydrates (12 – 17%), water (1 – 5%), aromatics, dyes, mineral, antibiotic and other substances.
– Odysseus stuffed ears of members of his team with bee wax, not to listen to the singing sirens.
– Honey has excellent antiseptic properties for many years, it retains its quality, not spoil, not mold. It was known to ancient Romans. They canned with honey a rare game from faraway countries. Bathed in honey, it kept the freshness and flavor for a few years.

– The average flight of a bee in May lasts 51 -53 minutes, June – 50-59, July – 41-52 min, in August – from 62 to 82 min. The more abundant the honey flow, the less time a bee spends.
– To grow 1 kg of bees they need about 1.2 kg of honey and 0.9-1.5 kg of pollen, depending on content of protein.
– Overwintered bee can breed only one young bee, spring bee – three. The drone larva needs the amount of feed, same as 3 – 4 working bee larvae.
– Number of bees in the winter can be defined by their mass. 1 kg is usually 10 -11 thousand bees, and
1 kg of usual swarm – only 6 – 7 thousand. This difference is due to the fact that before leaving the swarm bees take honey in goiters and carry it with them. So weight is increased by 25%.
– Bees have color vision. According to the Austrian Research Dr. Frisch, they see not only the colors which the human eye perceives, but also up to 30 shades of each, elusive human vision. But bees like the white, blue and yellow. The red color they confuse with the black. That’s why it was decided to paint the hives in such colors. American scientist James L. Gould recently found that particularly fast bees find food sources, painted purple. 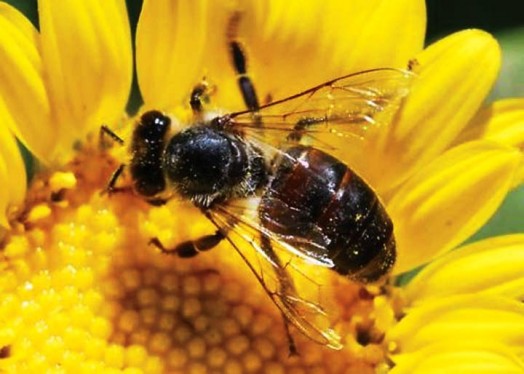 – Flying out of the hive, bee carries a small electrical charge. During the flight, it creates an electric field around, and the charge becomes positive and increases, especially in sunlight. According to E. Erikson, the potential difference between a flower and a bee is needed for the magnetic attraction of pollen grains to the hair cover of a bee. Electric charge of the returned to the hive bee serves as a kind of information about the location of the source of honey and distance to it.
– Bees are “champions” of smell. They perceive and distinguish odors by thousand times stronger than a man. Searching the source of honey bee feels from far away the aromas of flowers, and among them – the best ones by the content of the nectar.
– Bees are “weathermen”. Before the rain, they unanimously return to the hive. Scientists explain this by the fact that before the rain and storms the atmosphere has electric charge and the bees feel it. It serves them as an alarm, calling for a return to the hive.
– Bees are “sculptors”. If you cut stencils with obtuse angles 109’29, and 70’23, (equal to the size of cells), bees can mold shapes and letters.
– Bees are “mathematics”. Honeycombs have different dimensional accuracy, rigor, and accuracy of forms. Bees chose the most rational geometric shape – hexagon with a three-sided pyramid of overturned rhombs at the bottom. This form provides the most dense adjoining of cells, and, therefore, the highest strength of the buildings. The rationality of the forms of bee cells is evidenced by the fact that the ancient Greeks concluded that there is no more economical by material consumption and longer lasting capacious
vessel, than a bee cell with strictly constant size. Obtuse angles are 109’28 ‘, and the sharp ones – 70’31’.
– Bees are “indicators” of environmental pollution. Bess daily can take samples of air, water and dust, settling on the flowers of plants in
a radius of 3 km, and brought to the hive with pollen and nectar. You only need to make chemical analysis of samples.
– Bees are “geologists”. British scientists have found that the chemical composition of pollen brought by bees in the hive, shows the nature of the soil, which allows to use the bees in the searching of copper, iron, precious metals.
– The closest “relative” of a bee – a bumble-bee, having Latin name “bombus”, is a paradox in science. Exploring aerodynamic features of the bumblebee, American scientists have come to the conclusion that the mass of the body, its streamlining and many other features do not allow it to fly, but it flies.
– When there is a lot of rain, the nectar in the flowers gets wet and sugar content is decreased. Bees do not take the nectar, which contains less than 4.25% of sugar. Most actively they collect nectar, containing from 50 to 56% sugar. In hot, dry weather, small droplets of nectar quickly evaporate water, sugar crystallizes on the surface of nectaries and the bees can not collect it.
– The image of the bee since ancient times is symbol of diligence, accuracy and selfless devotion to the family. In our time in Italy, Norway, Malta people use small coins with bees.

– In nature, except honeybees, there are their closest “relatives” – solitary bees.
– The power lines and high voltage lines, running near apiaries adversely affect the lifetime of bees, safety of queen bees and in the long run productivity of bee colonies. Under the influence of electric fields, the bees are much more aggressive.
– The word “nectar” in Greek means “drink of the gods”, bestowed immortality.
– The great naturalist Charles Darwin called the building instinct of bees “the most amazing of all the instincts”.
– The goddess Dali (Georgia) and the goddess Gunda (Abkhazia) are mythological protector of bees.
– The body of Alexander the Great, who died during the trip to the Middle East, was transported immersed in honey, in order to eliminate corruption.
– Flying bee speeds up to 65 km per hour without load. It flies 1 km per minute. Loaded with honey and pollen, it reduces the speed of flight in half, depending on the direction and speed of wind.
– In the flight the bee wing makes 440 strokes per second.
– The queen bee larva is increased in size by 3 thousand times for 5 days, worker bee – by 1.5 thousand times.
– The bees are still endowed with mysterious mechanism (ability) in exceptional cases to extend their lives to save the bee colony by 5-6 times.

– The queen bee lives 50-60 times longer than worker bees.
– In the old days, the hives were stained with homemade paints: lime mixed with curd and gum. It was called cherry glue.
– The distance of flight of bees and area of collection depend on many factors: the strength of colonies, weather, season and time of day, the intensity of the selection of nectar, honey plant concentration and other factors. Usually bees collect nectar within 2 km from the apiary, but with meager honey yield the fly up to 3 km. Weak families work within 1 km, strong – even 3-4 km.
– For smoker they use saltpeter rags or corn cobs, impregnated with a solution of saltpeter (50 g nitrate in 2.5 liters of water) . You can use also dry birch bark and rotten wood of willow.
– The bees do not sting your hands, if you rub them with the juice of mint leaves.
– Each apiary should have first aid kit. The kit should have a means to help the victims of bee stings, validol, suprastin, ammonia, iodine, 3% solution of hydrogen peroxide.
– Bees can act as a hen. So, after the death of a chicken people put eggs in a hive of a strong family of bees. Eggs were laid on top lap, covered with insulation, and sometimes were turned, as is done in incubators. Just in time 17 chickens were born.
– The queen bee has a “suite” of 8-12 bees surrounding it in one row. Bees of “suite” turn their heads to the queen, they are constantly replaced by others. Their primary role is feeding the queen with milk. The queen periodically stops, interrupting egg-laying, and takes the royal jelly. Only when there is a “suite” – queen lays eggs rapidly.
– The famous Swiss scientist Huber (1750-1831) found that queens mate with drones outside the nest, without mating queens are barren. 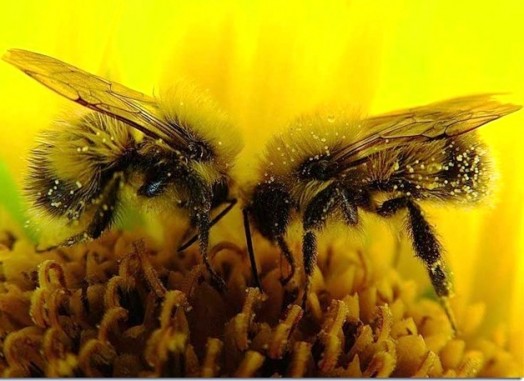 – The goddess Artemis in Ephesus State (Greece), represented the women’s chastity, and, according to legend, she was the reincarnation of a bee. On the coins of the State on the one hand they depicted bee, on the other – a deer.

Where are the bees that can kill hornets by overheating?
Japanese beekeepers prefer to grow European bees that are more efficient than the endemic Japanese bees. However, hives are often attacked by the Japanese subspecies of Asian huge hornets, one individual can kill forty bees per minute. Local bees, in contrast to Europeanб learned to deal with these hornets. Several hundreds of bees gather around the predator in one big ball and move the muscles, warming the air inside the ball up to 47 °C (116 F). Hornet dieы from overheating at the temperature of 46 °C (115 F) .

How plants can help in demining?
People long ago started to train animals for demining – bees, rats, mongooses, sea lions and dolphins (in the case of neutralization of sea mines). However, plants also can help, for example, a flower, named Tal. This plant is known, bacause it becomes red in the harsh environment, and its genetically modified version becomes red in the presence of nitric oxide, which evaporates from the explosives. Thus, after spraying the seeds above mine fields, one can clearly identify in which areas are mines. 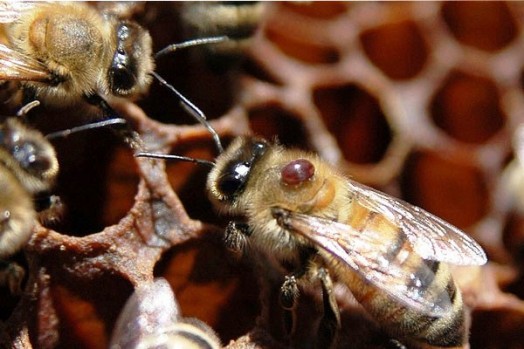 What is the classical problem of informatics bees can solve with the efficiency of modern computers?
Laboratory studies have shown that bees are able to choose the best route. After localization of flowers bee returns back, so that the resulting path is the shortest. Thus, these insects deal effectively with the classic “traveling salesman problem” of science, which is solved by today’s computers during several days.

What birds help people to find honey, and why?
Some birds like to eat beeswax, but are not able to get into the hive. Instead, they look for people or other mammals that eat honey, fly up to them and ask to follow them, leading eventually to the bees. After opening the hive, a person takes the honey, and the birds get the wax.

How Ecuadorian smugglers produced drug honey?
In 1985, the Peruvian customs officials stopped the export of large quantities of honey from Ecuador, finding the cocaine there. Moreover, the drug has not been mixed in mechanically. To obtain such a honey bee flew over coca plantations.

Why the Pentagon trained bees?
Pentagon experts sometimes use trained bees to detect explosives by smell.