Smoker for bees – a device that allows the beekeeper to create and send a stream of smoke to the right place.

Bee smoker has a simple structure: a metal cylinder – this is a furnace, which burns coal and generates smoke, small “forge” bellows blow air into the furnace, and a stream of smoke comes out the top of the smoker. 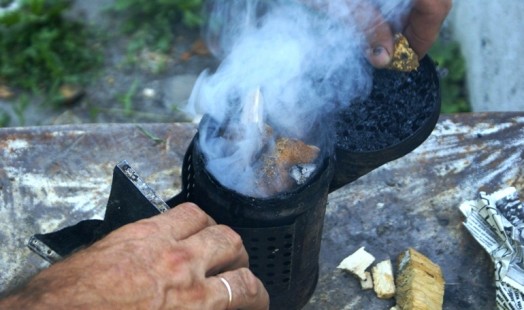 Bee smoker as a honey equipment was established in ancient Egypt and the neighboring nations of North Africa. Then it was a clay vessel with two openings, reminiscent of a turtle. They pawned burning fuel through the large hole, the air was got by mouth, and the smoke escaped through a small hole. Such a primitive device is still used by the natives of Algeria.

The idea of fur smoker for bees belongs to an american beekeeper Hamet, who in 1870 gave a description of his proposed coarse and heavy instrument. For the formation of the smoke beekeeper had to push the bellows with both hands.

In 1883, the famous american beekeeper Kvivbi have created a more perfect instrument, but it has a major drawback: it’s bellows were connected directly to the camera for fuel. As a result the bellows quickly burnt.

Finally, the third american beekeeper Binh went further: he separated bellows from the furnace  and smoker for the bees got the type that we use in the present. Certainly, the construction of bee smoker was improved over the years and  now it is a comfortable, lightweight, durable, affordable device. Great contribution was made by such world-renowned beekeepers: Ruth, Lavinsky, Clark, Kenturi, Lynes, Rotshyuts, Tseringer. 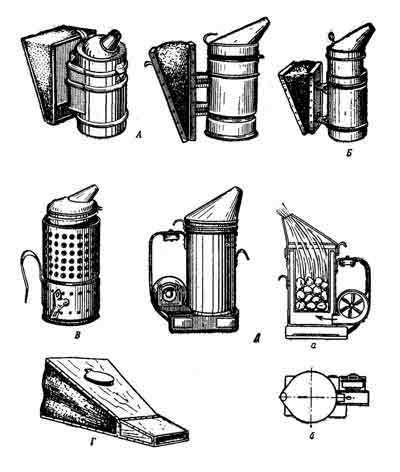 Let’s look at some of the structural details of bee smoker. Seemingly simple device, and yet it is thoroughly planned.

It consists of two-walled cylinder, with one end it is closed down, and the other – has hinged on the hinge cover with the top of a truncated cone. This cone is a nozzle to direct the smoke.

Modern bee smoker is designed so that the fuel doesn’t fall out of the hive, mesh,  inserted into the lid prevents it. On the bottom it also has a mesh, which prevents contact between the fuel and the bottom, so that smoker is not dangerous to put on the painted roof of a neighboring hive. In addition, this grid is used as a ashpan for heating.

Beekeeping smoker is used not only to work with the bees, but also for the putting certain medications to the notch. For these purposes, there are smokers with long nozzle.

To incite bee smoker, it is used dry rotten, bracket fungus, paper. Preference is given to bracket fungus, dry pieces that always are kept in stock. Smoke from such fuels has calming effect on the bees, and helps to fight varroatosis .

You must lay a fuel that can smolder and produce a lot of smoke.

Should not be used hardboard pieces in the smoker, as the burning has noxious substances. 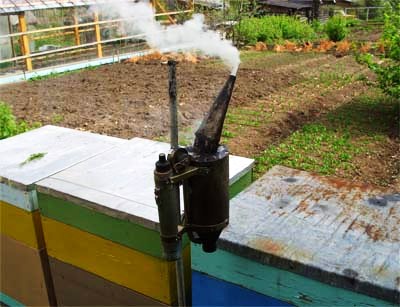 Technique for smoker for bees

Smoker should always be kept in good repair. Smoker parts  should be promptly cleaned of carbon and resin, keep it with dry fuel. This allows quickly ignite the device and apply as directed in the most urgent cases .

Bee smoker should always be on hand at the beekeeper. For any type of work, even in those where, apparently, do not plan to open the hive. You can have it as a ritual smoker fired up, chisel and facial mesh in hand – come on!

For example, preparing for migrations , you must close notch before loading. It’s getting dark, but part of the bees “roam” on migratory board. How to close the notches? Very simple: to make one or two jets of smoke, the bees come into the nest and the notches can be closed.

May be the most unexpected situations, especially when moving, unloading, and the like.  Somewhere it can be shaken the hive, braces break, undertop moves, bees climb. What to do? Here, of course, it is necessary to put on the grid, take bee chisel, smoker. Calm the bees, tweak the hive, close, consolidate and move on.

We can give you in a lot of instances where you need smoker. To remove the swarm, overtake bees from the down when pumping honey . But we want to emphasize that the amount of smoke should be minimal and in any case you should prevent sparks fly out of the nozzle that can injure the bees.

We will share one more technique to save fuel for smoker. When there is a pause in a smoker, you put it to one side. If you keep standing smoker, then pull is harder and you have to lay a rotten often. Pause of several minutes give fuel and time savings.