Social bees (Apidae) are divided into three general groups: stingless bees (Melipona), bumble bees (Bombus) and honeybees (Apis). Main type Apis includes Apis dorsata and Apis indica (Indian), Apis florea (dwarf East Indian bee), and finally, honeybee -Apis mellifica, or  Mellifera. Members of the species Apis mellifica can be divided into a large number of varieties, or breeds, which are characterized by common features, but differ by body coloration and behavior.
Apis mellifica type can be divided into two major groups, black or brown bees and yellow bees, although such a classification may not be scientific. Black, or brown bees are more common. They are found in Central Europe, the UK, North Africa, Madagascar and the Americas. Black or brown bees are very similar by appearance. The second group – the yellow bees are primarily Italian bees, that  were brought from northern and central Italy to the U.S. and other countries. 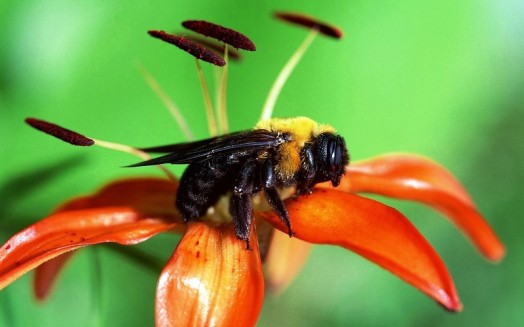 Black or brown bees are divided into 2 types: the Dutch or heather bees, originally discovered in the Netherlands and imported to America, and black or brown bees, found in Central Europe and the UK. Black bees were brought to America, apparently, from the Netherlands, but not from Germany. The difference in the behavior of the two types of bees is so prominent that they can be called separate species. Real German or English bee, found in Central Europe, in the south of France and in the UK, is sometimes considered as Italian bee, common in Northern Italy. Beekeepers in America and Europe do not like real Dutch bees, bred in America. Before they thought that  there are two types of black bees in the U.S. But some think that there is only one type, that has a Dutch origin. Bees of Virginia, North and South Carolina, Georgia, Alabama and Louisiana vary in color (from black to brown ). These bees are more prone to theft than pure-bred Italian bees, but they both provide the same honey collection in case of abundance of nectar, gathering dark honey, such as buckwheat. Black or brown bees are nervous. If you open the hive, they will begin to rush from one corner to another. When the beekeeper removes the frame, they hang in clusters on the frame, then they drop to the ground and randomly scatter in all directions. Because of this behavior of bees it is very difficult to find the queen. 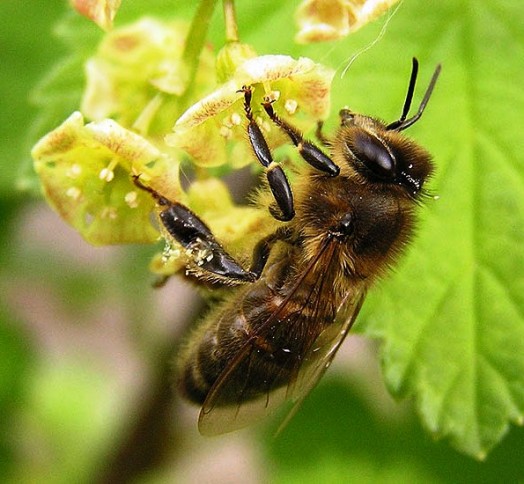 Dutch (American) bees have the unpleasant property in the period of the theft to follow a beekeeper along the apiary. They are more inclined to swarm than Italian bees and beekeepers, working in the old way, in many cases can only save first swarm. Seal of honey of the Dutch bees is more white than of the Italian or yellow bees. It is easier to shake off Dutch bees from the frame during pumping honey. They are easier to move for a short distance, than the Italian bees. In general, the Dutch bees are less irritable than Italian bees, but they sometimes climb under the clothes, and of course, sting more than the Italian bees. 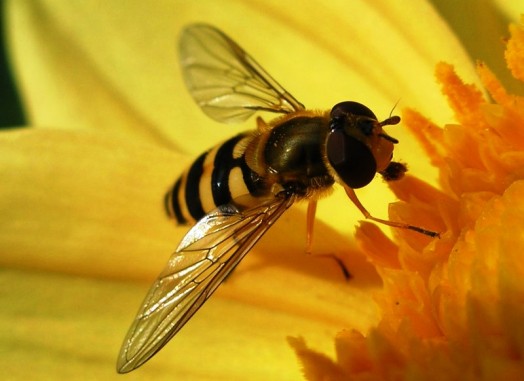 German (brown) bees in Central Europe and the UK are somewhat lighter than Dutch bees. Inexperienced beekeeper can not distinguish these species. Black bars of German bees are fringed with yellow fuzz on the abdominal segments, which makes them brown. In the south of France, German bees are ubiquitous, they are easy to cope with the smoke, they do not run and do not gather randomly on the framework, as the Dutch bees in America do. German bees are hardy and resistant to disease. While the black bees of America suffer from European foulbrood, real French bees resistant to the disease as much as American (Italian) bees. Cowan, Simmins and some other most influential British beekeepers prefer Italian bees than English brown. However, the Italian bees are not so common in the UK, as in America. There are several other varieties of black bees, which are considered to be better than the Dutch or German brown bees. Among them we can be call Krajina, Caucasian and Banat bees. These bees were imported to various countries, including America. It should be noted that the Krajina, Caucasian and Banat bee is more peaceable than any kind of black bees, it gives the same honey flow like black bees, and in many respects they bear comparison with Italian bees. 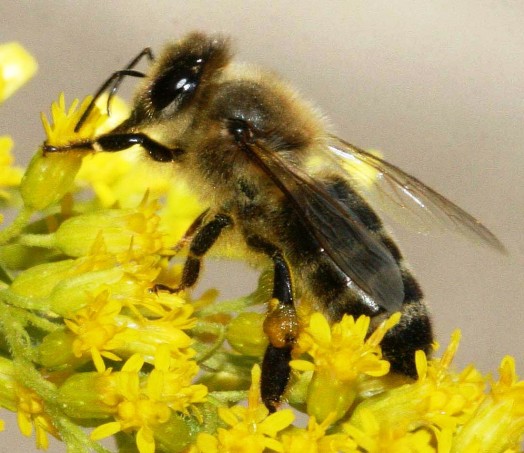 Krajina bees were sent to the U.S. by Frank Benton in the early 80’s . Simultaneously Dadan also imported several queens of Krajina. These large silver-gray bees are found in the north-eastern part of the Alps. Closer to the Danube Krajina bees become brown, near the border of Germany they are black. In the east, the Krajina bees are found on Banat plains of Hungary, and in the south – on the Balkan peninsula. Purebred Krajina bees are only in the Krajina, on the Adriatic coast they have blood admixture of yellow species. Segments of the abdomen are black, fringed with grayish ring with whitish bloom. Because of this Krajina bees are easily distinguished from the brown bees. Krajina bees more peaceful than brown bees of France. They sit quietly on the combs, taken out of the hive. In some areas of the U.S. Krajina bees raise brood better than Italian bees. However, these bees have a negative feature, they extremely like swarming. For this reason, they are not suitable for U.S. portable apiaries. Very valuable is that there is no propolis in the hive of Krajina bees. Honeycombs are white and clean. If they do not have a tendency to swarm, the Krajina bees would be ideal for the production of honey. 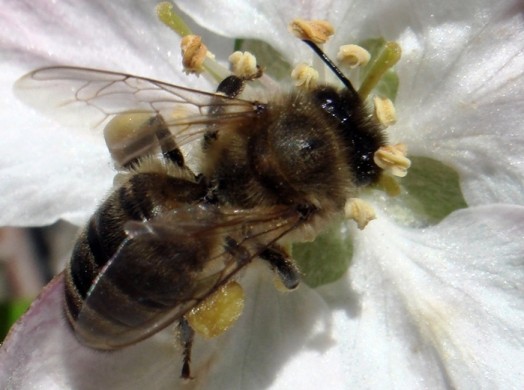 Caucasian bees are somewhat like the Krajina bees. Both do not run randomly over the hive, when it is opened. Both varieties of bees, like the Italian bees, are resistant to European foulbrood. Caucasian mountain bees are the most peaceful in the world, with the exception of the Saharan bees, found in the oases of Northern Africa. Caucasian bees, grown on the plains, are not so peaceful, like bees from the Caucasus mountains. But both races collect a lot of propolis and therefore are not suitable for the production of honeycomb. Mountain race of Caucasian bees is gaining popularity. Hives can be often opened without smoke in bad and good weather. Bees fly buzzing around the face and hands, as if they are going to sting, and then return to the cell. This variety is suitable for apiaries in the small towns and suburbs. It is noteworthy that the Caucasian bees have a longer proboscis than Italian bees. The Caucasian bees are hardy, work well and are not prone to swarming. 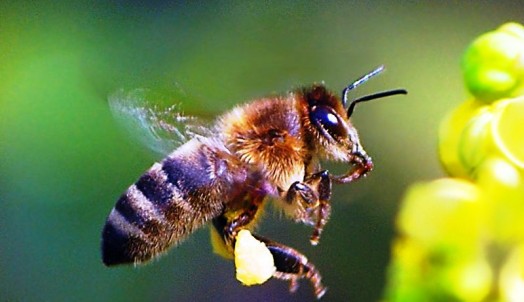 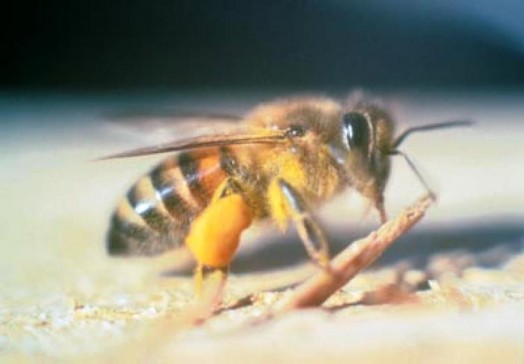 North African black bees (Tunisian, Punic) were tested for some time in the U.S. These bees are irritable, stain everything with red propolis. They should not be delivered to other countries. 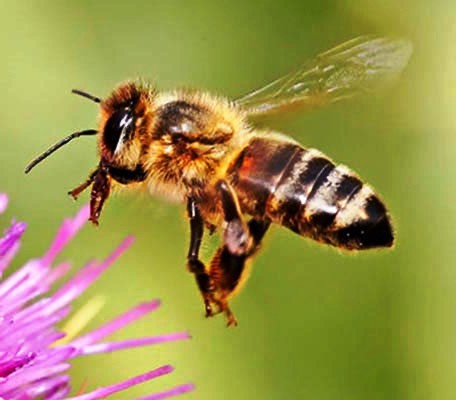 Madagascar bee was found in Madagascar and neighboring islands, and probably bred there for thousands of years. This bee, apparently, is the blackest of all black bee species. Its body has very poor brown fluff. It is impractical to bring the Madagascar bee to other countries. West African bees are characterized by shiny black body and bad properties.