This bee was bred by a monk from Britain, named Adam. In the twentieth century (50-ies) by crossbreeding the Italian bee with the dark bee, he got the Buckfast bee. The purpose of this selection was a breeding of bees that would be resistant to damage of the tracheal mite. Because this parasite while is able to destroy a large number of British bees. 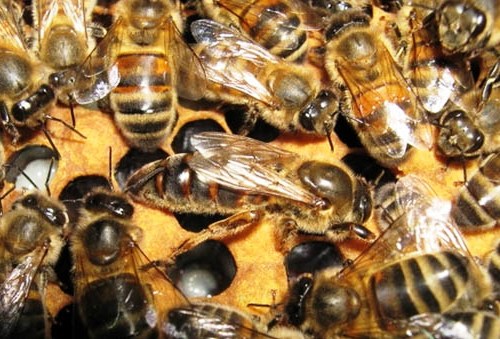 Adam Monk visited a number of countries (Africa, Middle East, Europe), and has done very important work, and the world had seen the book “In search of the best strains of bee”. This book  introduces the possibility of the selection of bees, based on the theory of Mendel. Based on these trips and several queen bees, Monk has created a type of honey bee, which got its name from the English village of Buckfast . And for that he spent about 10 years. As a result, the bee had a long evolution, and has become more viable and economical, and most importantly, it is not affected by mites, paralyzing the trachea.

To work with these bees is not difficult, the monk Adam used the most basic techniques in breeding of bees. During the early spring, empty extreme frames were removed, then he installed special separators, so bee colonies were compressed. At the same time, in the productive families is a general change of Buckfast queens so it remains approximately 10% of older females who later give a new offspring. Buckfast bees can easily adapt to the environment, but especially like wet area where they first lived (British Isles).

Bees of this type have a number of different features. They are resistant to disease, have a keen sense of smell.The disadvantage of this bee is the instability to frost, but they are very stable to askosferoz. It is a peace-loving bee, which is characterized by the average swarming. Among all types of Western European bees, Buckfast bees have the highest honey-making. Wide import of this bee out of the kingdom of Great Britain was started in the second half of the twentieth century. Thus, in many countries there was confusion of Buckfast bee with a local population of bees. But, nevertheless, the breed has not lost its basic quality. In recent years, many species of bees have an admixture of the Buckfast bee. Bees of this breed are not aggressive, and attack very rare. And it makes it easy to check the hive in any season and in any weather.

Breeding center of the bee is now in Germany, there are many bee stations that contribute to the breeding of this  bee.

According to many beekeepers, the Buckfast bee has a high flying ability, and also clears nests from the debris in the hives. At present this breed of bees can be found almost anywhere. When breeding Buckfast bees  natural selection is preferred, so beekeepers select individuals with the best genes. These simple steps can be made at home. Breeding of Buckfast bees is not only for fans of ordinary home apiary, but also it is good for commercial purposes.