“Ladies and gentlemen, please take your seats and fasten your seat belts. We take off ” – a pleasant voice of flight attendant announces through the intercom. Aircraft engine starts to buzz. You feel a slight push, and the plane starts to go on the runway. You excitedly grab for your seat in nervous anticipation of an unprecedented feeling that you are going to experience. Trotting down the runway, the plane is quickly gaining speed. When the aircraft leaves the ground, your stomach is heavy, and you are experiencing discomfort. Land becomes less and less, and you are floating above in white clouds.

Are you familiar with this? Probably all of the above reminds you of your first stay on board, except the memories clouded by your propensity to motion sickness or “terrible” fear of flying. Have you ever thought about how the aircraft can fly? Physicists and engineers understand this very well. They studied the complicated design of airfoil and wing. Rounded leading edge of the wing and steep trailing edge, driven by traction of engine with capacity of more than 63,300 pounds, ensure effective lift for the aircraft.

Now imagine that the plane is deprived of any engine, with which it can fly.  The plane, which has no engines – can not fly. All of which brings us to the topic of this article, the wings of the bumblebee. Theoretically, as the scientists say, the bumblebee can not fly and must remain on the ground, as well as the giant airliner without an engine. Taking into account the fact that the basic equation, which is the basis of the aerodynamics of flight, must be the same as for flying insects as well as for aircraft, it is simply impossible to explain how bumblebees can fly. Bumblebee wings create more lift, than scientists predict by a conventional aerodynamic analysis. Reciprocating motion of the wings makes the aerodynamics of insect flight is incredibly unstable and difficult to analyze.

Bumblebees – are hairy and noisy bees, ranging in size from ½ to 1 inch . Bumblebee wings are very small in relation to the body. The plane, built in compliance with the same proportions as those of the bumblebee, would never have get off the ground. But bumblebees are not like airplanes. They are more like helicopters with flexible blades. Movable airfoil generates more lifting power, than rigid and fixed wing. However, the ostrich, which can create a moving airfoil, never takes off. Thus, the scientists were in a very difficult position as to how do bumblebees take to the air.

Theoretical physicists have used for bumblebees theory, applicable to the Boeing 747, and determined that they should not fly. However, this does not “prove” that bumblebees can not fly, it just means that physicists use the wrong equation. Ivars Peterson tried to defend the scientists, saying:

“The problem actually is not that the scientists are wrong, but the fact that there is a significant difference between the object and the mathematical model of this object.”

It’s kind of vague statement is a consequence of the following compelling reasons: “the definition of mathematical model can not describe the mechanism of the flight of a bumblebee and is not suitable for this purpose”. Flight of the bumblebee in fact is not simple.

Generally, flying insects for many years is a mystery to scientists. French entomologist Entoni Magnan wrote in his book about this problem in 1934. In it, he refers to the calculations made by the engineer André Saint-Lag. His conclusions were based on the following: “the maximum possible lift force, generated by the wings of the aircraft of the same small size as the wings of a bumblebee, and with the same slow motion, as the motion of a bee in flight, would be much smaller than the mass of a bee” (Dickinson , 2001).

Beginning in 1934, engineers began to apply the theory of aerodynamics for designing aircraft such as the Boeing 747 and reconnaissance fighters. These aircraft have a fairly complex structure, and, in spite of this, their functioning is based on fixed principles. Bumblebees violate this principle because they rotate and flap their wings at a rate of 300 to 400 strokes per second – almost ten times greater than the rate of signal generation of the nervous system! Bumblebee reaches such a high speed of flapping wings simply by contraction and relaxation of the muscles of his abdomen. Moreover, changes in patterns, that are drawn in the air by the wing at stroke, are the cause of a completely different aerodynamic forces that lead to the confusion in the mathematical theory. Bumblebee wings do not swing like a conventional hinged door. On the contrary, the upper part of each wing describes a thin oval with wide angle. Also, the wings “flip” during each stroke: the upper part of the wing is upwards during the down stroke, and turns down while moving up. 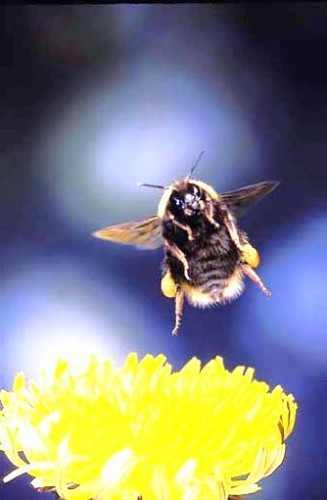 Studying the mechanics of animals, Charlie Ellington at Cambridge University in England, seemed to solve the mystery of insect flight. He found that the vortex flow, moving along the front edge of the areola, produces extra lift force. Researchers Michael Dickinson and James Bech, University of California, Berkeley, have received conflicting information. In the scientific journal Nature , they shared the results of their research regarding additional aerodynamic lift force, which is formed by the bumblebees. They built a big scale model of the fly Drosophila, and watched its flight in a tank filled with mineral oil . Using tiny Drosophila model they reproduced the flight in the air. Professor Dickinson says: “Based on our experiments, we concluded that the assumption of Ellington can not explain the phenomenon of vortex merger, which occurs during the stroke of wings” (McPhee, 2001).

Nevertheless, Ellington findings prompted scientists to search for the equation of “transient operation” that could explain the mechanism of the previously discussed wings. The distribution of velocity and pressure inside the liquid are known according to the Navier-Stokes equations, which were formulated in the nineteenth century. Data obtained by Ellington showed that flight of the bumblebee can not be explained only by the Navier-Stokes equations. Bumblebee wing movements are too complex to be able to formulate the equation that would accurately describe the aerodynamics of the flight of the bumblebee.

Trying to unravel the mysteries of insect flight, they developed a model of the wings of a bumblebee on a larger scale. The application of these models has given fruitful results by connecting of the two main forces in the fluid – pressure force produced by the inertia of the fluid, and a transverse force caused by the viscosity of the fluid. Professor Dickinson reported new data that he received in 2001. This data is based on the theory of Ellington that Dickinson have attempted to refute. In the study, published in Scientific American (“The explanation of puzzles  of insect flight”), Dickinson argues that the flight of a bumblebee has three main mechanisms: a slow stall, wake capture and rotational circular motion.

Slow stall occurs when the wing is at too steep angle to the air. Vortices, formed by planes usually leave behind a strong turbulence in the wake of propeller of aircraft . However, to remain in the air, insects just need these vortices. Vortex – is a rotating flow of substance, similar to the drained water in the sink. When the motion of the wing is at a slight angle, the air is split at the front of the wing and smoothly turns into two streams, which run along the top and bottom of surfaces of the wing. The top stream is moving faster, resulting in pressure above the wing is lower. That is what pulls the wing upward, producing lift. The first phase of slowdown initially increases the lift force due to the short flow, called wing’s leading edge vortex. This type of vortex is formed directly above and behind the front edge of the wing. The air flow in the vortex moves incredibly quickly, and thus obtained low pressure significantly increases the lift.

“The old myth of the bumblebee reflects our lack of understanding of the dynamics of unstable viscous medium. In contrast to the established fixed wing, with stable dynamics, almost inviscid (devoid of viscosity) fluid, the insects fly into the sea of vortices. In addition, these vortices are surrounded by small eddies and air currents, which are created by its wings” (quote from Segelken, 2000, the words in brackets are present in the original article.)

In addition to delayed stall Dickinson discovered that bumblebee wings create temporary powerful forces that appear at the beginning and end of each stroke, and these forces can not be explained by braking. These forces reach a maximum during the return stroke, when the motion of the wing is slowed down, and the wing of the bumblebee starts spinning rapidly. This means that the rotation can play an important role in the mechanism of flight of the bumblebee. Dickinson demonstrated the idea of rotational motion mechanism with a tennis ball. Tennis ball, which is hit with backspin, pulls air faster on its upper surface, which causes the ball to rise, while the rotation of the top draws air from the bottom faster, causing the ball to fall. Dickinson concluded that the flapping wings of a bumblebee generate significant lift with rotation.

Finally, Dickinson discovered that capture wake, ie clash of wing with the vortex wake, left by the previous stroke of wing, is also involved in the flight of insects. Each flap reserves many vortices. When a bumblebee wing changes direction, it returns through the air with a stirred vortices. The wake provides the energy that was given to the air by insects, so grab of a wake by insects – is a way to recover energy. So, wake capture helps bumblebee to recycle energy.

Scientists still do not know all mysteries and complexities associated with the flight of the bumblebee and other insects. But they have high hopes that they can learn more the complex bumblebee wings to apply the knowledge to the development of new aircrafts. Engineers can create large planes, reproducing only those samples that were created by the Great Architect – God, who built all things (Hebrews 3:4). God put so much explicit and precise things in designing of tiny bumblebee wing – and it is only a small part of the amazing universe that he created.