In nature there are different bees, honey bees have brothers and sisters who live in the ground, the so-called ground bees. They all feed nectar and pollen. Many think that bumble bees are enemies of bees, but it is quite wrong, bumblebees can sometimes get into the hive, but because of its slowness they will be punished severely. Conversely bumble bees help to take nectar, which is deeply hidden in the flowers, bumblebees with their powerful mandibles gnaw way to the nectar, so the bees can reach it. 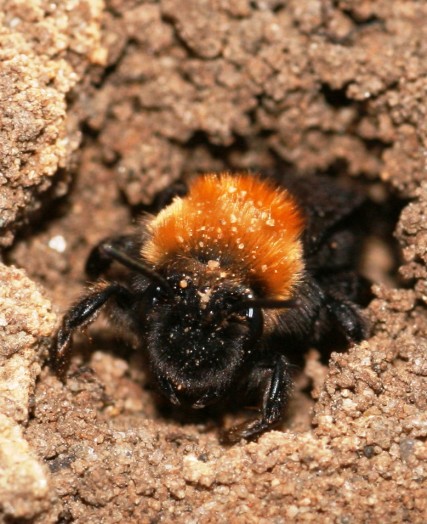 There are different bees and bumblebees, they are called ground, because they lives in the burrows of various rodents and other small animals. There are 300 bumblebee species, there are small ones and similar to honey bees. But all the bees are excellent pollinators, and without them  almost all vegetation would disappear. 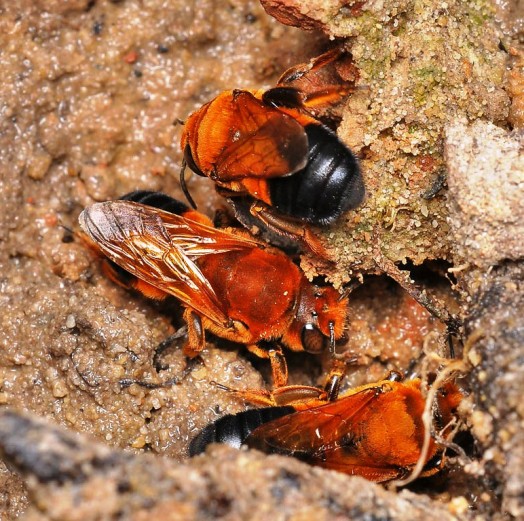 Bumblebees – the most reliable pollinators of the garden, they fly in any weather and in cold and rain. Bumblebees are the most cold-resistant insects: they are able, quickly and often reducing the chest muscles, to heat their body rapidly to the desired 40°C (104 F). This allows them to take off early in the morning and collect nectar first, when the air is still not sufficiently warmed up, and gives bumblebees the certain competitive advantage over other types of insects. They can operate at low temperatures, the yield is doubled after their work. These terrible and loud louts are actually quiet and peaceful insects, they do not bother anyone and do not sting. Do not confuse bumble bees and hornets, they are different (hornets are predators).  During nearly the entire summer a queen of  bumblebee lays fertile eggs, from which the workers are released at first, and then small queens. Each cell has a few eggs, larval development lasts 10-12 days, then the larvae spin a cocoon, in which turn into pupae. After two weeks grown bumblebee is born. Workers and small queens build a nest, collect food (nectar and pollen) and lay unfertilized eggs, from which only males are released. From the last eggs large queens are born, then they are fertilized by males. Old queen dies and the community of 500 individuals is scattered. In the winter there are only the fertile queens, that winter in burrows under the snow. Honeybees wintered in the hollows before, but now – in the hive (stock food for winter and wait for spring).  The bee hardly reaches some flowers – the head does not fit or proboscis is too short, it is clearly seen in the following video.

In the nature each insect has its plants, everything lives in harmony. Small ground bee, a little less than a honey bee, digs burrows in the ground and lives there. Chest, head and abdominal tergites are densely covered with thick gray or whitish hairs. Pubescence of face and temples are often mixed with numerous black hairs. They dig burrows in areas of sandy soil devoid of vegetation or covered with only sparse grass, such as on the edges of roads, in clearings in the pine forests. Offspring of a bee usually does not fly away, but digs  the hole in the same area, so there are large colonies. If you open one of the burrows, you can see a shallow slightly sloping course, from which small blind burrows run, filled with thick bright yellow honey dough with an egg on the surface. In the following video it can be clearly seen, that because of its small size, it is easy for ground bee to reach the flower, but honeybee hardly can do it. Each flower has its own bee.

Andrenidae have short, compared to honey bees, proboscis and long hairs on the thighs and hind legs. Many species are Oligophagous, ie, feed only on a small range of plants. Their colonies are visited by parasitic insects. Flies Bombyliidae, Mutillidae, and blister beetles Meloe, and riders Gasteruption, and small Larvaevoridae, and wasp lustrer Chrysididae. If you look closely, you can see the  females with red abdomen, which do not have apparatus for collecting pollen, despite the fact that their proboscis is not like of wasps. These are parasitic bees Sphecodes. Females get into nests of Andrenidae and lay eggs.