In early spring, when the sticky leaves blossom, ants are working from morning to evening. After a few days a large aphid rises, moving slowly from the craters of the main course, secured by ants, followed by others. They remain in the air not for a long time and revert back to the ground. In a day or two aphids finally move into the trees. Ants are watching them all day, and in the night they lower aphids into the cave, firmly grasping jaws. Aphids, which is dragged by the ant, draws legs and lays motionless in the jaws of the ant.

Ants carry sucking aphids from occupied branches to the free parts of the branches or trees before cold nights.  they guard their wards, shouldering under supervision for many days. Shepherd from time to time comes to aphids and  touches the abdomen with antennas, aphid secretes the drop of sweet juice, and ant licks it with tongue. Again it is fresh and can tirelessly work. After filling the goiter with sweet secretions of aphids, ant leaves them and hurries down the tree. Faced with its brother, it gives him a sweet burden, and with an empty goiter rushes back to aphids, and the brother returns to the nest. Springtails, lice, mites, beetles, rove live in the nests of ants. Ants lick sweet secretions and ether-like substances of many of them, so they do not drive them out of the nest, but even feed. Anthills do hot have cells like in the bee’s nest, no wax and honey pots. Ants nest in general has no dish for liquid food. And yet,they are honey insects. 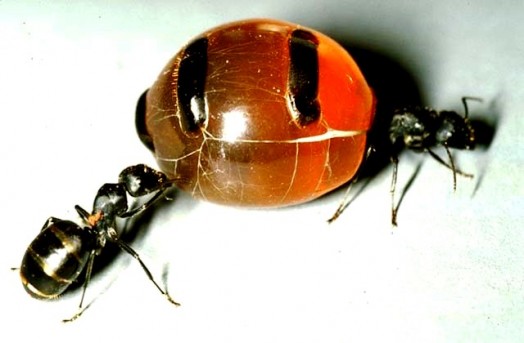 Breaking in the summer the nest of the ants of the genus Formica, you can find hidden cozy chambers. There you can see dangling worker ants with normal head, but with enormously distended belly. They are living ant barrels. Goiter is full of sweet sap and sweet secretions of aphids and coccidia, so inflates the abdomen, so it looks like a transparent berry. Sweet food in the living wineskins is called ant honey. This is a real supply of food, which  maintains the existence of the family in the winter. In Australia and Central America, honey ants are considered as a delicacy and people collect them. Ant honey has slightly sour taste because of the impurity of formic acid. It is consumed it in its natural form, and people make from it different healing and soft drinks. This delicacy for many tribes of indigenous Australians is more delicious than dried locusts or the dry garbage of Sinai Trabutina mannipara scale insect, which, according to legend, was declared a godsend. As you can see, food of the poorest people even from biblical times did not very elaborate.

Ants-predators . They are happy to hunt, kill or paralyze with their acid the large and small insects, pulling in own nests the larvae, caterpillars, pupae of pests like pine moth, green oak leaf roller, sawflies and, dismembering the prey into pieces, put in cameras for its many thousands of larvae. The larvae eat away all soft parts and worker ants throw out of the nest hard (chitin) parts. Each ant brings per day up to 15-17 harmful caterpillars. Besides protein food ants like sweet carbohydrate diet. During the season, one family produces up to 0.5 tonnes of separation of aphids and coccidia, which is 65 kg of sugar. 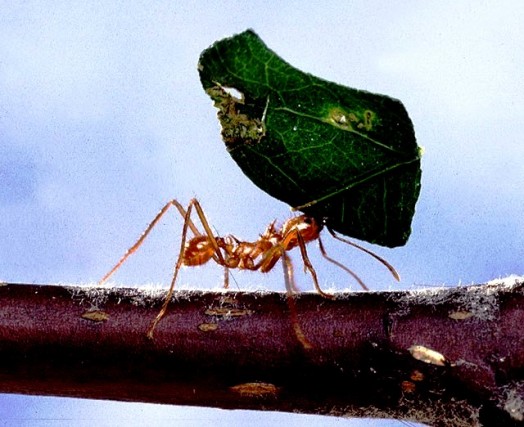 German entomologists estimate that one nest destroys from 0.8 to 1.0 kg of insects per day. Red wood ants remain active for 200 days a year, killing up to 1.5 tons of insects.

The exchange of food is not only the distribution of nutrients: pheromones also are distributed in the family, which are similar to hormones in the body that regulate the behavior of individuals in the family. 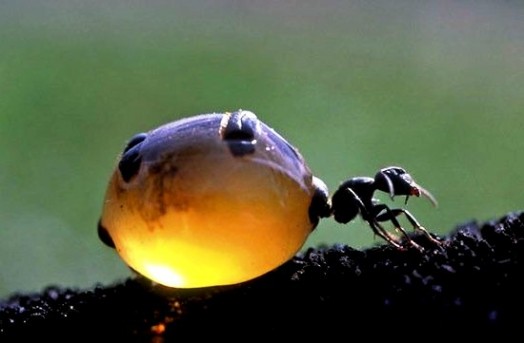 Since ants are polyphagous, feeding on both plant and animal food, they hunt for many invertebrates.Pine caterpillar moth, pine moth, oak leaf, winter moths, sawflies, pine moth are especially attractive for them. Mites are parasites of ants, which feed on hemolymph of ants, and riders on the larvae, laying eggs on the ants.