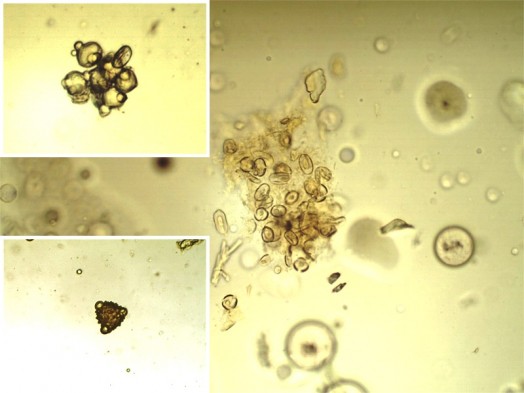 Sugar range of mature honey is represented mainly by glucose and fructose. Floral honeys contain about 70-80%, honeydew honeys – approximately 50-65% of reducing sugars. These two monosaccharides partly come from the starting materials or are formed from  contained in them sucrose under the influence of  allocated enzymes of bees. Both sugars are in different ratios in the honey . Most often fructose prevails, the amount of which is 34-41%, while the glucose ranges from 28 to 35%. New methods for the analysis of sugars showed that sugar range is very wide. But crystallization of honey is largely determined by the quantitative ratio of fructose and glucose.

The ratio of fructose and glucose is one of the options to pre-estimate the intensity of the crystallization of honey. Honeys with high fructose crystallize very slowly, and crystallized honeys tend to soften and exfoliate. Crystals of glucose move down, and the top becomes the dark, rich in fructose liquid. These honeys are difficult to sell, because they look like a spoiled product. The crystal growth rate can be even expressed by mathematical formula.

If honey is kept at a temperature above 25 ° C (77 F), the crystallization slows down, because the increase of temperature reduces the degree of saturation of honey glucose. When you store honey at 30 ° C (86 F) the beginning of the crystallization is delayed for months. Honey can be stored in a liquid state for a long time, if at first you sustain it for at least 5 weeks at 0 ° C (32 F) and then store at 14 ° C (57 F). Honeys, thus treated, remain liquid for two years. Samples, which were stored at 14 ° C (57 F) without cold storage, crystallized in 5 weeks. Through targeted heat treatment in which the seed crystals are destroyed, you can prevent or delay the crystallization of honey for long. Hadorn and Tsyuriher reported that crystallized honeys remain liquid for 8-12 months after heat treatment. This treatment of honey is when you briefly heat to a relatively high temperature and immediately cool it to prevent changes in quality. This method, known in the dairy and brewing production, is called pasteurization, especially widely used in the U.S., Canada and Europe. As a result of pasteurization you will not only prevent crystallization, but also destroy sugar yeast, which can cause the fermentation of honey. Pasteurization requires a costly equipment such as heat exchangers and various centrifuge with hot air supply.

Disadvantage of all these methods is that they can lead to a qualitative change of honey, especially in the case where, after heating the honey you can not quickly cool it. In Germany and neighboring European countries such techniques are not practiced.

Storage time also affects the course of the crystallization of honey. The gradual decrease in the number of glucose that occurs in the process of “maturing” of honey, increases with increasing temperature, resulting in a glucose-fructose ratio changes in favor of fructose, which prevents crystallization. Honey crystallization starts with the formation of so-called seed crystals. Under this name we understand the microscopic particles such as crystals of glucose and pollen grains, which attach all the new crystals. These “primary crystals”, first of all, form on the walls and the bottom of the tank and “grow” by adding of new sugar crystals, resulting in formation of larger and larger structures, which are combined with each other. The final result is a single, solid crystalline structure with components of liquid honey between the individual links of it.

If there is no seed crystals or very little of them, they form first from glucose molecules, which combine to form tiny crystals that grow in a specific order. Since only part of the excessive amount of glucose molecules is linked by crystals, they grow in the crystal stars, like in the coarse honey. Primary crystals of glucose form mainly at 5-7 ° C (42 F), the optimum temperature for the growth of these crystals is 14-15 ° C (59 F).

Different honeys crystallize differently. Rape honey often forms small crystals with a middle or solid consistency, while dandelion honey has a very firm texture and coarse structure. Honeys, which crystallize rapidly, should not be sold in liquid form, as they will crystallize in a short time and will lose their form. Beekeeper should strive more to influence the course of crystallization, so that they become plastic and fine-grained. For this, there are two ways:

– Mechanical crushing of crystals and their uniform distribution throughout the mass of honey;

– Adding of about 5-10% of fine-grain “started honey” into the liquid honey.

Mechanical processing of honey in order to influence the crystallization process begins when extracting honey from the comb. In the process of pumping you break the existing small crystals of glucose. In small farms after removing the foam the honey is mixed by a triangular beech slat,   sliding on the vessel wall with one of the planes of the slat and breaking the primary crystals. Arisen shards of crystals are evenly distributed throughout the mass of honey without getting the air into the honey. With the increase of the length of the mixing process crystallization is accelerated and graininess reduces, as seed crystals are evenly distributed  throughout the mass of honey and are not able to grow to a large size.

If the honey is stored in a dry place at a temperature of 14-15 ° C (59 F) and is stirred daily, soon it will become cloudy and will get consistency of the “mush“. Once the honey starts to harden, it’s time to pour. Now honey will get a fine-grained structure and remain pliable as by mixing the communication between the crystals was broken.

The same effect is achieved by the so-called “vertical” mixing honey, when  you move up and down the mounted on the metal handle plate with holes in the honey, not getting the air.

Mixing honey by hand – it’s very hard work. In the presence of a large number of honey it is recommended to get electric accessories. Specialty stores offer a range of wood and metal bits, which can be inserted in reduction gear driven by an electric drill. When buying racks and attachments you should pay attention to the fact that their surface should be protected by a plastic cover, otherwise there is a risk of getting of metal or plastic particles from the packaging into the honey. 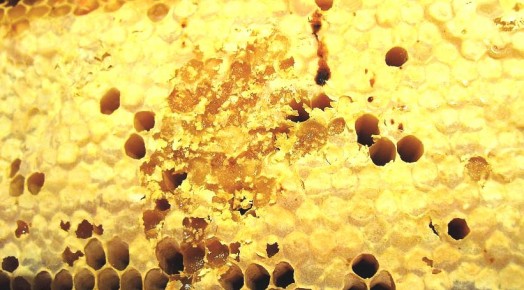 Some farms use mixers to influence the process of crystallization. Beater should be located close to the wall of the rotating container. Favorable effect on the crystallization is in the “slightly debauched” honey, especially if the honey was already quite crystallized. The same effect is achieved if the honey, prepared in the same manner is passed under high pressure through a nozzle without air. These methods have long been used in the cosmetic industry for the manufacture of creams and pastes. Coarse or hard honeys today can be made creaming and plastic by using special mills or rolls. Since the connections between the crystals are broken, then processed honeys have unstable consistency. Depending on the humidity of these honeys, sooner or later separate. In large bee farms  honey is still kept in tanks that are equipped with heated-tool for mixing. After pumping honey flows into the sump, from which, after removal of the foam it is pumped to the storage tanks. In this case, to influence the course of crystallization the best is making the “starter”. To the liquid honey is added about 10% of microcrystalline “model” honey. This honey should be heated to about 20 ° C (68 F) for easier mixing. Uniform distribution of the starter throughout the mass of liquid honey is a prerequisite for success. This can be achieved easily by stirring, during which it must be ensured that the honey does not get the air, because it can cause a fluffy white layer on the surface of honey, especially if it’s a low humidity. After the mixing honey can be poured. In the phase of crystallization the honey is stored in a dry place at a temperature of 14 ° C (57 F), which should be as constant as possible. Under favorable conditions, the crystallization lasts 3 days. Temperature variations delay the crystallization. For this reason, in practice, the crystallization lasts two weeks. Method of starter is used for many honey and ensures the stability of the crystal texture of the product for many years. Next, we will briefly tell how to prevent the crystallization of honey. 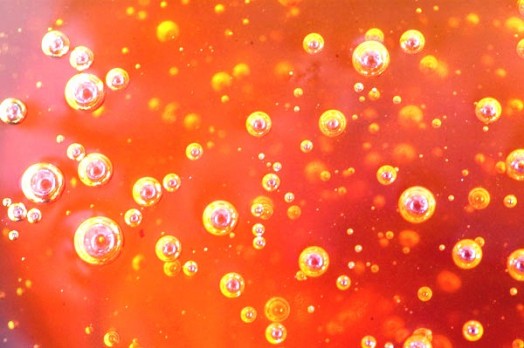 In the U.S. and Canada usually  is used filtered honey. In this honey as possible are removed the particles that cause the crystallization process, such as pollen grains, crystals of glucose and air bubbles. Lothrop and Paine first described the honey filtering under pressure using diatomite. In the future, other methods have been developed that work on the same principle. However, all of these methods must be rejected, since they require the use of high temperature. Because by using it you not only remove pollen grains and other substances, but you can change its color and taste. In accordance with the requirements of the quality of honey imposed by the Decree about honey and standards of the German Federation of Beekeepers these honey processing methods are invalid, because honey’s substances can neither be removed nor added, and the biological structure of the honey can not undergo changes that go beyond well-defined limits.

Very elegant way to prevent crystallization of honey was developed and patented by Hontarsky. In this case, all present  in honey crystals of glucose are dissolved and all air bubbles and foreign substances are  removed except for honey characteristic inclusions.

By using of ultrasonic and electromagnetic waves it is also possible to reduce the rate of crystallization of honey. The effect of ultrasonic treatment is based on the destruction of glucose molecules. Since in this case you damage the enzymes of the honey, this method is not suitable. The use of electromagnetic waves, in contrast, does not cause any changes in the quality of honey. Richter’s method is applied immediately after evacuation of honey. In this case, the honey goes through a certain device in which it is affected by low-frequency electric field. It is assumed that treated in this way honey remains liquid for a long time. In practical beekeeping, such a device has not found wide application.