We tell here about the life cycle of a honey bee, you should know it, if you are raising bees for honey. In the winter, approximately a month and a half before the wintering of bees, the queen bee starts to lay eggs, and bees – to nurse coming out of the larvae. Brood has the space in the combs, which can be heated by the bees to a temperature of 34-35°C (93 F). The stronger hibernating family, the more space it will be able to heat and the larger clutch of eggs the queen can develop. On the first warm spring day when the air temperature is 12-15°C (53-59 F) bees start to fly out and thus exempt from the feces that have accumulated over the winter. After the cleaning flight the egg-productivity increases, and the young bees are gradually beginning to appear. Simultaneously with the birth of the young bees old bees die, and approximately one month later the bee hive population is updated. With the onset of spring sustainable warmth and the appearing of the fresh honey and pollen, the egg-laying of queen is greatly enhanced. Especially a lot of eggs (1 200-1 500 and more per day) queen lays in June. After this period,  egg laying reduces and at the end of August – beginning of September stops completely. Young queens, derived in the current year usually longer lay eggs in the autumn.

In the first month after the start of the work of bees is usually seen a decline in the family: old bees die in greater numbers than the new ones are born. But soon the number of young bees increases. Strength of the family is growing, reaching a maximum in June. During the second half of spring the queens, especially the older ones, willingly lay drone eggs, drone brood appears and then drones.

Swarming of bees is when the part of the worker bees with the queen fly away from the family to form a new family. The appearance of bowls with eggs and then swarm queens is the first sign that the family is preparing to swarm. The  queen gradually reduces the laying of eggs, and in the last days before swarm it almost never lays eggs. In such a family the usual ebullient work weakens. Bees fly less for a collection, and during the heat sit under the migratory board. When suddenly the weather turns bad and lasts several days, the bees often bite queen cells and destroy the larvae and pupae. With the onset of heat and harvest the bees again lay new queen cells and prepare to swarm. Queen cells are laid not all in one day, with some gaps, in a few days. Therefore, the young queens also do not appear at the same time, but at intervals of 1-2 days. After sealing the first queen cells, first swarm with the old queen goes. It is called the first swarm. When leaving a swarm, thousands of bees fly out of the notches, as if hurrying to leave the hive.The bees circle in the air, making a special, different from the usual, sounds. Experienced beekeeper, even at a great distance, without seeing the coming swarm can correctly define the output of swarm by these sounds. The queen goes out of the hive only when more than a half of the swarm has come out. It is in no hurry to take off. Only after walking along all the migratory board, it takes off and joins the swarm. 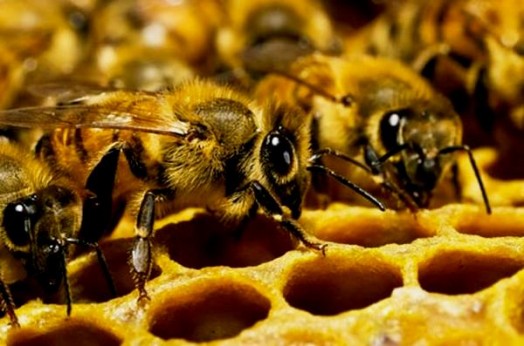 The first swarm usually lands in the apiary or near it, on a tree, bush, fence, etc., in the form of clusters, tapering down. If you collect this swarm, put it in the another hive and place anywhere in the apiary, even next to the hive of this  swarm, the bees quickly and completely forget their former home. The queen, which emerged from the hive, is not always so light, that can get in the air and follow the swarm. Often, after a few futile attempts to take off, it returns to the hive again. The swarm also returns to the hive. The next day, the swarm reiterates its departure. It happens that the queen during the swarming, not being able to take off, falls into the grass and die. Then a swarm   comes back and flies a few days later, when the first young queen is ready. In such cases, the first swarm has a young barren queen. If you do not collect on time this swarm, it, after spending some time in complete immobility, rapidly  flies away. It can not be stopped. If the swarm gets out of the hive in the afternoon, late afternoon, it can spend the night on a tree branch. About a half of all bees and sometimes more fly with the first swarm. Before flying swarms of bees fill their goiters with honey so they are twice heavier. Therefore, there are about 5,000 bees in a kilogram. In the family, released the swarm the subsided of bees is quickly replenished by young bees, daily outgoing from cells. After a few days the young queen comes out of the cells. About a day or two before bees eat the wax from the top of the cells and reveal the cocoon. In this way they make it easy for the queen to go out, which should only chew cocoon. It happens that the queen does not chew the cap of the cocoon to the end, so the lid of the cell hangs and may re-slam. It is very similar to the whole cell. Before leaving the cell the queen makes sounds like croaking. Receiving no answer, the young queen chews the cap of the cell and goes out. Finding the other queen cells, the queen begins to worry: it runs on the honeycomb and try to destroy the queen cells and pupae. If the family was already swarming and it is not going to continue to swarm, the bees do not only stop the queen, but they are involved in the destruction, gnawing queen cells from the side. But when the swarm condition continues, the bees do not allow the destruction of queen cells. The queen makes sounds like “hm … hm … hm …”, while  the queens in the cells respond with muted “qua … qua … qua …” This kind of speaking of queens is audible even outside the hive, beekeepers call it singing of queens. Singing of queens is a sign that the next day you can expect the release of the second swarm.The second swarm has always a young barren queen. If there is wet weather, detaining the swarming for a few days, a few queens can take off with the second swarm. They jump out of the queen cells and join the swarm. The next day or the day after family can release a third swarm, which usually takes a few queens. If you give the freedom to bees, they can continue to swarm until the family becomes only a handful of bees. Swarms are often grafted on the same spot from which has just been collected the previously released swarm. Sometimes swarms, flying at a time, mix with each other, by landing in one location, or join the previously emitted swarm. When the family stops swarming the remaining young queen flies to mate with a drone a few days later. In modern beekeeping it is not recommended to allow the natural swarming in the apiary. It is replaced with more profitable and planning (artificial) swarm. 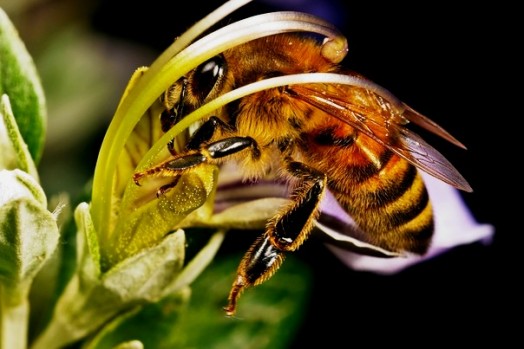 Blossom of honey plants typically lasts from early spring to late autumn. However, the bulk of the honey the bees collect in a short period of time, when key, best honey plants in the area (linden, buckwheat, fireweed, etc.) flower. At the time of flowering of honey plants, with the right care for the bees, families of 60-80 thousand bees that are able to bring daily 4-6 kg of honey and more. “There comes a major harvest” – beekeepers say. In some places, particularly favorable for beekeeping, during the season there may be two or even three of these periods with abundant honey harvest. At the time of the main honey flow the young bees fly earlier, on 7-9th day from the birth. All work in the family at this time is directed only to collect the possible large amount of honey. In each freed from the brood cell the bees immediately pour honey, the brood number is greatly reduced. Soon the young, freed from   the education of larvae, non-flying bees take nectar from flying bees, process it into honey, fold and seal it in the cells, strongly ventilate the hive, etc. During the main harvest 100 thousand available cells are not sufficient for folding of honey. In addition, not all of them can be filled with honey, so as part of the cells are still busy with the brood and bee bread. So beekeepers during the main harvest increase the volume of the hive, putting additional cells.By the end of the main harvest there are large stocks of honey in the hive, but the number of bees is greatly reduced, as during the honey harvest many bees die. At this time, the family begins a new period of work – raising bees for winter. When the harvest completely stopss, bee expell drones.

When the summer heat changes to cooler days and cool autumn nights, poor pasture less and less attracts bees, which at this time sit in the hive, or look for other sources to replenish their stocks. Bees scurry around, looking for insecure notches or crack in the hives.With the onset of cold time the queen gradually reduces the laying of the eggs, and then it stops completely. All the cracks in the hive bees close up with a special adhesive – propolis. Bees also sometimes close large notches with propolis, leaving only a few narrow passages. With the release the cells from brood the bees partially fill them with honey, transferring it from the side combs to the center. As the temperature reduces to 10-12°C (50-53 F) bees completely stop the flights from the hive. They make tight streets in the middle of the nest, become lethargic, forming a so-called “winter club”. You can use for winter storage of bees the special rooms – it is a special kind of cellars, dug in the ground, with more or less constant temperature in the range of 4 to 6 ° C (39-42 F). At rest, during the winter bees consume relatively little food. In the spring, when the queen begins to lay the eggs and larvae appear in the hive, honey consumption increases. Honey at this time is spent to maintain the required temperature for the development of the brood and feeding of the brood. Normally wintering bees in the first half of winter usually sit very quietly, in the second half, closer to the spring, buzz increases, due to the appearance of the brood and increasing of temperature. Good honey is digested almost completely in the bee’s organism. Only small remains of the indigestible parts are accumulated in the hind gut of bees, where they remain for the winter. Only during the first cleaning overflights the bees are released from feces.