People, suffering from hay fever, usually claim that it it is one of the worst diseases. During the blooming of some herbs a person has constant runny nose, eye mucus, sometimes fever. Folk medicine  divides hayfever into 3 types: mild, moderate, strong. Treatments for hay fever – are both preventive and symptomatic.  If you chew the wax caps once a day before the expected appearance of hay fever, the disease either do not appear or will be mild. In the mild form of the disease it is recommended to chew the wax caps once a day on Monday, Wednesday and Friday of each week, and you will have no runny nose, you can breathe through the nose.

– Blocked nose opens in three minutes, in six minutes it is possible to breathe through the nose. Runny nose stops five minutes.

– Inflammation of the throat disappear in three to five minutes.

If you have severe hay fever, traditional medicine recommends the following:

1. The three months before the expected appearance of the disease take one tablespoon of honey after every meal for dessert, the best way – as a honeycomb, but honey is also effective, it must also be taken – one tablespoon with a glass of water at night.

2. Two weeks before the expected appearance of the disease, take a mixture of two teaspoons of honey and two teaspoons of apple cider vinegar with half a cup or a glass of water before breakfast and another at night. Such treatment should be continued for as long as symptoms are.

3. Continue to eat a tablespoon of honey after lunch and dinner for dessert, and drink a mixture of apple cider vinegar with honey before breakfast and at night.

4. If necessary, chew the wax caps (zabrus) more often during the day to avoid the possibility of a cold nose and to breath freely.  This treatment works this way: a combination of consumption of a mixture of apple cider vinegar and honey and chewing of zabrus acts much better than injections. If the injections do not prevent the common cold, the traditional medicine is effectively-acting.

Patients, who use the described method of treatment of hay fever, only occasionally sneeze, they do not have runny nose. People tell that about the third day after the start of treatment you can observe the following results:

– You can pat the dog or cat

– It is possible to ride.

– It is possible to feed the chickens. You can milk a cow.

– You can sleep under a blanket.

– You can sleep on a feather pillow.

– It is possible to work in the flower garden.

– You can cut ambrosia.

– You can smell the roses.

Observations have shown that chewing of honey combs three or four times a week cures hay fever in three years. Sometimes people who suffer from hay fever, are put into conditions that cause extreme deterioration of the disease.  For example, one student was working on a farm. When people lagged with feeding cows, his job was to pour grain from sacks into mixer wagon. Each time he had runny nose, stuffy nose, eyes were watering. He chewed honeycomb three times a day. A week later, he did his job without the described phenomena.  Another student, who had hay fever, also worked on the farm, felt almost normal when chewed honeycomb three times a day. They asked him to stop doing it in the midst of hay fever in order to test the effectiveness of the above method of treatment. He agreed. Seven days he did not have any signs of deterioration, despite the fact that he was breathing dust. But on the eighth day the disease appeared again in a very strong form, and he again felt unwell. Again he used the above method of treatment. A week later, he was fine, no sneezing and runny nose. The reader should not think that these positive results can be seen only in Vermont, where people have long learned to use traditional medicines, let’s see the information from Texas. 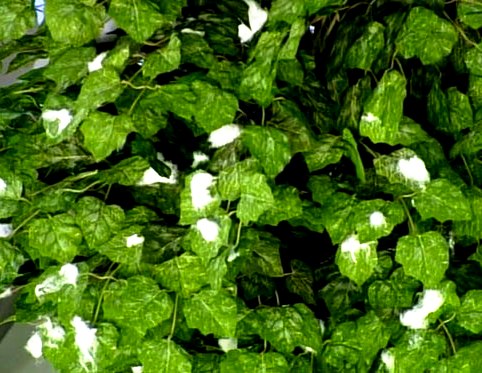 Experimental treatment of hay fever was launched in April 1986 by William Byumonda hospital in El Paso from the start of the flowering of plants in March to a maximum appearance of pollen in August and a large number of patients. Rate of illness was so severe that people of El Paso began the campaign to combat weeds. Many cases have been observed in the military base there. They were the reason for the experiment. From conversations with people who have hay fever, it was concluded that only one natural remedy has real value.  Some of the patients stated that in the past year or in the past two years, they observed a the effectiveness of treatment of the disease with the use of honey collected by bees from local plant species, especially when they chewed wax of honey combs. They also use the sticky resinous substance that is found in the buds and bark of trees. It can have different colors: brown, pink or gray. Resin –  protectшму means of buds, herbaceous plants and trees. Ants and wasps look for sticky, resinous substance in the buds of the pion. Honey bees are attracted to the resin on the bark of pine and spruce trees. Dairy cows or goats eat buds, coated with resinous substance, the farmers came to the conclusion that it is an effective means against diseases of the respiratory tract. They collects short pine branches with buds and some needles, put them in a bowl, fill with water and boil on a low heat for three days. The resulting brown liquid is filtered and concentrated by adding honey. To stop the disease of the respiratory tract they take one teaspoon of this mixture several times a day. On the bark of fir you can find bubbles. Pierce them with a knife and collect the liquid flowing out of them. Consumption of a teaspoon of the liquid three times a day has a beneficial effect on the respiratory system.