Beekeeping  is well documented from the beginning of X century.Thanks to documents we can learn the technique of beekeeping and its economic importance in the national economy. 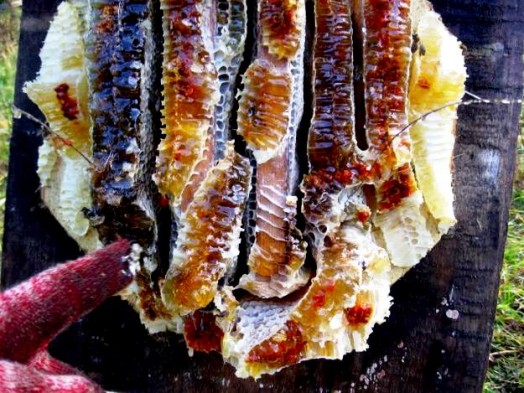 Honey was earlier the only sugary product for food, as well as the most important raw material in the production of soft drinks and alcoholic beverages. Wax has held a leading position in the religious ceremonies of Christians and was widely used as lighting material for domestic purposes. Honey and wax performed critical functions in foreign trade and domestic exchange.

Wild bee-keeping – the oldest method of mining and primary form of cultural beekeeping. As an independent management the apiculture took shape before the transition of humanity to agriculture. Bee-keeping is based on farming and keeping bees in the boards. Board – is a natural or artificial hollow in growing trees, which are suitable for beekeeping.

Bee-keeping, as an independent form of mining, took three stages of development:

– Search, protection and care of the bees, which are inhabited natural hollows;

– Care of man-caught swarms in the natural hollows, which were prepared in advance;

– Care and breeding of bees in hollowed by man hollows.

Board – a special form of a hollow, which was created by man in the living tree for keeping bees. Living trees provide relative cool in the summer, and in winter it was warmer than in the hollows in a dead tree.

Artificial hollows bees settled willingly, it usually happens in a year or two after making it. Although there were secrets to attract bees – hollows were rubbed with herbs, beekeepers glued pieces of honeycomb.

It gave a person the opportunity to select the best trees for the bees equipment, convenient and productive for beekeeping. In the forest fields in good light bees collect more nectar. The hive was arranged on the height of 8 m (26′). At this altitude, the nature of climate for honey bees was the most optimal and provided protection from wild animals that can destroy the hive.

For arrangement of the hive they usually chose a tree with a diameter of at least two meters (7′), and at the location of a hive – no thinner than sixty centimeters (23”), as the tree, which had a smaller diameter, could fracture.

The height of placing of a hive played an important role. In the old days they had a common proverb – “The higher the board, the sweeter the honey”. 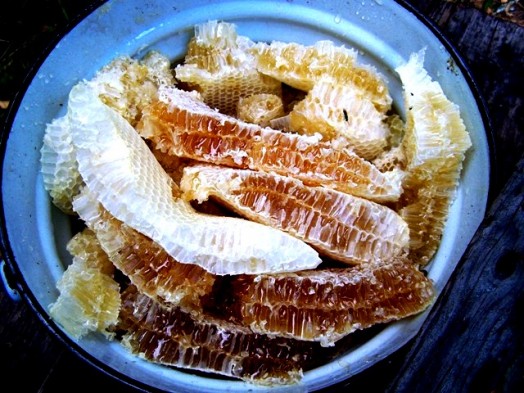 Produced in natural conditions without human wild-hive honey is referred to platinum varieties of honey. Since honeycomb was not separated from pollen combs, the unusual odor, taste and medicinal properties of wild-hive honey are explained by admixture of pollen, wax propolis, bee brood and bees, ie, the presence of up to 20 amino acids and digestible proteins. Each comb is a unique proportion of honey and pollen, so there is no same hollow honey by taste and quality, each is unique.

Generally, honey from wild hive has dark brown color with a delicate sweet aroma with a hint of wax impurities, the taste is sweet, pleasant.

Diastasis number of these honeys is 50 units of Gautier, they are the most concentrated and useful. Water mass fraction is 15. 7%, mass fraction of reducing sugars – 90.6%, sucrose – 0.7%.

The wild-hive honey included in the daily daily diet of astronauts. And it is given to Japanese students to enhance mental performance.

Wild honey is found only in the Philippines. Local breed has aggressive character, low number of worker bees and low productivity. There is one indisputable advantage of the local bees: high resistance to varroa mite and other bee pests, which makes it possible to process it without the use of chemicals and antibiotics.

Most colonies of bees are on coconut plantations, which bloom year-round. The nectar of the coconut tree contains about 15% sucrose, the tree can produce up to 1 liter of nectar. But in recent years the bees suffer from thoughtless cutting of coconuts and overreliance of insecticides. Also such honey can be found in Russia.