When transporting bees greatly worried. Nest temperature rises sharply, causing brood may be worn out, cells break off and the swinging frame crush the bees and the queen. To avoid this, you must carefully package bees for sale or transport. In order to prevent breaks of combs frames with honey are removed from the nest, replacing them empty and the brown cells or frames with honeycomb. In a standard hive you put a second body or an empty shop.

For migrations frames of  Hoffmann are very comfortable. They do not require special packaging, so preparations for migrations are easier. We took into account the time for packaging bee in the hive with separators and in the hives with frames of Hoffmann. The packaging of one bee colony using separators was 38-minutes, and  only 24 with frames of Hoffman. Thus, an apiary of 100 families, fully equipped with the frames of Hoffman, can be packed  for 3-3.5 days by two people, and with separators for 5-6 days.  To avoid them swaying in a way they must be attached by separators: put wooden wedges 12X12 mm (0.47*0.47”) thick and 100 mm (3.93”) long between side slats . Separators have both sides. When all separators are in place, push the last frame with the chisel from the side wall of the hive and insert a thicker separator.

Frames are considered well packaged, if they can not be removed from the hive. To prevent separators from falling at the bottom of the hive during transport you apply to the top of them scoring wire with length of 24-26 mm (1”). Easier and faster to pack the family, if you connect the splitter to a special “comb” at a distance of 25 mm (1”) from each other and nail to the top of the strip of iron. To pack the box, it is enough to lift the edge of the lap and put the comb with teeth between the frames. Each bee colony has two combs in the front and rear walls of the hive. When shipping bees in a twin-separation hive you put a comb or separators in the bottom and in the upper housing. When shipping in the early spring, if the family is not strong enough and the nests have a little of brood and honey, you place lap on the frames, press it and nail. In the summer and autumn bees can steam at this package. So the family is packed differently. You pull rare burlap strips on boards of the hive-loungers  and nail it. On the hives without boards and double-hulled hives you put empty bodies and nail rare burlap on top. Bodies on four sides are connected by wooden bars and nailed to the lower body. 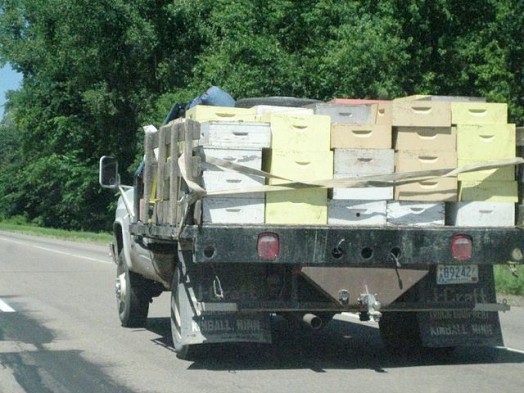 Bars should not be too thick, but strong. Better to do it from a cherry or willow, then they do not crack or break. Nails need to be not too long, so as not to break the wall of the hive. Housing and bodies can be fastened with a specially made clamp or with buckles. Beekeeping offices sell good packing tape to bond cases. Each tape has a key.  You pass tape under the hive, encircling and tighten with a key on the roof. It is possible to use seat belts for the same purpose. Some beekeepers use wire mesh rather than rare burlap. But this is undesirable, as the bees will climb into the light and will be excited. Concerned bees are harder to carry. If the nest is getting hot, the bees leave the hive and hang on burlap as a swarm. When transporting the hives with mesh you should shade hives with the lids with the wooden blocks under them so the hive has clean air. In the evening, when all bees are in the hive you condemn notch with a wooden fence, and the family is ready for transport.

It is more difficult to transport the strong families, especially if they are in a standard hive of 12 frames. In this case,  even if you put an empty body – it does not save the family from scalding. It is best to carry a strong family in the hive-loungers, so apiary must be equipped with these hives. To make the best use of nectar in a new place, instead of an empty body you should put the case and place 6 frameworks of honeycombs during packaging. Do it after the move is more difficult, because the bees are angry. Wax is not cut off on the road. Strong families during transport rebuilt it. When hives arrive at a place with the second building, arrange them and do not disturb the bees with inspections. The bees start to collect nectar and pollen at the first day. A week later, they will calm down and you can easily see how the body is filled with honey. To watch the staging of the third building, or not to miss the selection of honey, some families should be transported in the two housings with body. 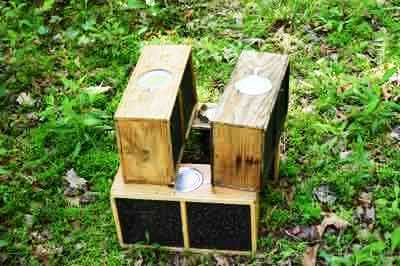 Bees can be transported by all means of transport, but it is better to use trucks, previously prepared for this purpose. Pose plank panels up to 1.5 m (59”) on the side. They are inserted into special slots or put on the board. Rear end shield is placed after the body is fully loaded with hives. Ship the family after the finishing of the flying of bees. On cloudy cool days bees stop flying early. Hives are set through the open rear gate, from the cockpit, as close as possible to each other, the notches are in the direction of running of the truck, or vice versa. The ranks of the first tier on the top are fastened with strips with width of 6 – 7 cm (2.3”), their length should be equal to the width of the car body. Then second tier of beehives is installed on rails. Laying rails between the tiers allows better ventilate the hives, protects  mesh or burlap against damage of the second tier of hives , prevents hives from the motion on a body. Ship double-hulled  hives in two tiers, hives-loungers and hives with bodies – in four tiers. Hives should always be installed closer to the left side of the car, and the covers – to the right, as the roads are generally risen to the center. The heavier load, put on the left increases the stability of the car, and put the right – decreases.

To facilitate the loading you should have the portable ladder in the apiary so you could bring a hive by unicycle wheelbarrow in the car’s body. Another worker at this time is on the car. Together you put the hive in place. If instead of the ladder you use stretcher, you need four people. Two people bring, and two – set beehives on the car. A more recent is simultaneous loading of screwed four hives by crane or tractor.

To unload and load fastened hives is easier, but it is more difficult in the future to work with the bees. American beekeepers have experienced different ways of loading  hives by cranes: by one, two, three, or four, and came to the conclusion that it is better to ship one hive. After a full load of car you carefully use the rope or sling-net, which is more convenient. To link by the rope you spend a lot of time, often as much as for loading. Linking the cargoвин sling-net is much faster and more reliable. To do this, first make a frame, made of thick rope, which ends are used for fixing mesh to the body. Long side is 2 m (78”), the size of the frame-4X3 m (13*10).  In the middle of the frame, as well as up and down you tie two ropes. 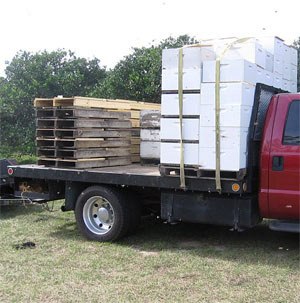 They are the foundation of the sling-net, and make it easy to replace any worn-out rope. Square of sling-net should be 12 m2 (129 ft2) to link hives on any car. Sling-nets can be used as temporary shelters for the equipment of a nomadic apiary. For this purpose it is enough to pull it on the stakes or the trees and cover it with the tar paper or cut grass. After loading the hives you should immediately hit the road.

The faster the bees will be delivered to the place, the better. If the distance is large, go during the night, but you need to stop and unload the car on the day, so the bees fly, and the people accompanying the car – rest. It is desirable that the beekeeper drives. In large apiaries it is already practiced to have the car, and the beekeeper or assistant drive it themselves. This facilitates the work of the beekeeper and does not require a special driver. On a good road car can go with a normal speed,  on rough road  – go slowly. Each car must have a tent in case of rain. Even in heavy rains it prevents the bees from the water. It can be tied by a sling-net, but so that it has not broken.

You should not carry dual covers on migrations as two car with colonies need a third car for these covers. They can be replaced by cut into chunks roofing, on which you lay not very heavy objects (stones, waste wood), so they will not to be blown away by the wind. To carry bees over long distances it is better to use a car. Or you can use the tractor to prepare the ground for planting.

Hives are loaded on a tractor in one layer. Load of bees in two tiers harder than making an extra trip.

If the family is in three blocks, it is impossible to remove  the third building before leaving: bees can be sweated and the family will die. It is better to put the empty magazine, and  the ventilation grid on it.