Unlike social insects the solitary bees are individual animals and parents do not come into contact with their children. Nevertheless, solitary bees have complex forms of care for the offspring – building nests, feeding, protecting the nest. Familiarity with the life of solitary bees helps to understand what changes had the instincts of their ancestors in accordance with changes in the conditions of habitat. On the other hand, knowledge of lifestyle of solitary bees shed light on the emergence of social life in the insect world, the highest level of which are the community of wasps, ants, honeybees and their highly developed instinct for construction, extremely complex instincts of brood care, with the amazing ways of communication between adults and original adaptation to the experience of adverse seasons. 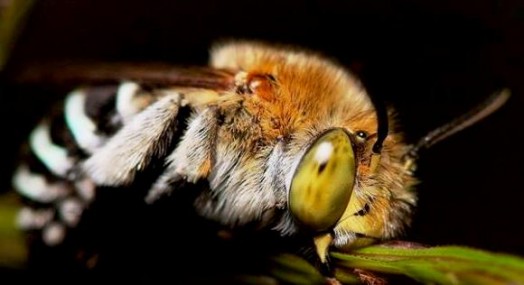 The total number of all species of bees is 20 000, of which only 12,000 were described. About 550 species of bees are public, others are solitary. Although solitary bees are common in all geographic areas, they inhabit more dry, warm or hot climates (Argentina, Eastern Brazil, Turkmenistan, Texas, the Alps, the Pyrenees). Few of solitary bees make their houses in the open space, on the rocks, under the roofs of buildings, on the branches of plants, etc. The majority of them settle in any ready-made shelters (in the hollow stems of plants such as reeds, in the shell of snails , thatched roofs, etc.) or in the cavities, made by the bees in the core of the stems of raspberries, blackberries, ash, maple, hazel and others. Bee-carpenter, bee-liturgus can gnaw cavities in pretty strong wood. The predominant part of the bees make their nests in the ground, on steep cliffs, in the adobe walls (Collette), in sandy soils, on the edge and clearings of the forest.

The most primitive of all the solitary bees are Collette. The absence of the means for collecting pollen and forked tongue end make them closer to wasps. Collett appear at the spring. On an elevated site with a sandy loam soil, this bee digs a vertical hole, or the main course, up to 20 cm (7.8”) deep, and at the end it digs short side entrance, which is used as a cell. On the walls of the cell bee puts with its bifurcated tongue the fluid emitted from the mouth. It solidifies as silky film with considerable stability (does not melt when heated, is not soluble in chloroform). When the construction of the cell ends, Collette starts to harvest the food. Collecting from flowers of willow pollen and nectar, it brings them in his mouth and goiter and lays on the bottom of the cell. It makes a semi-fluid paste of honey and pollen. Collett then lays an egg on the wall of the cell, not on the prepared food. This fact deserves attention, for the reason that solitary wasps also attach the egg to the wall of the cell, while the vast majority of solitary bees lay the egg on the food. After oviposition the cell is sealed with a lid of the same silky film, which covers the walls of the cell of Collette. Next, in the same way the other cells are rebuilt, the number to five, then Collett closes the nest and can start to build the nest in a new place. 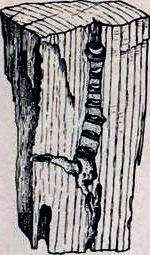 Bees of another kind – Prosopis are united in one family with Collette, also have no means for collecting pollen and nectar, so pollen is brought into the mouth parts and goiter. Prosopis make their nests in hollow stems of plants and other ready containers. In contrast to the above kind of Collette, Prosopis, like some other types of Collette, lay their eggs on harvested food as the vast majority of solitary bees. All other solitary bees have devices as chitinous hairs on the body or baskets on their hind legs to collect and bring pollen. They appeared at the time of improving of the building instinct and instincts of brood care. 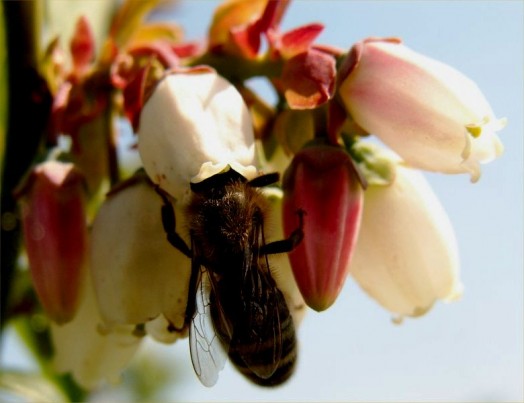 Many solitary bees, including Anthophora, have their nests close together, so that in some cases, form colonies of a large number of nests, covering an area of several tens of meters.

Complexity of the behavior of single bees suggests that up to the present state they came through a number of successive phases. Based on a comparative study of morphological features of solitary bees and wasps the researchers had the idea that solitary bees came from the so-called burrowing wasps in the past, about 80 million years ago. Members of the order Hymenoptera, to which the solitary bees belong, were found in the sediments of the Jurassic period (about 150 million years ago). It is known that many flowering plants were found in the Cretaceous sedimentss. It is reasonably to believe that the evolution of the bees went in parallel with the evolution of flowering plants. From the point of view of natural selection the cross-pollination was an important factor for the plants, which is most effectively carried out by insects. This explains the emergence and improvement of these adaptations in plants to attract insects such as color, odor, secretion of pollen, nectar, the special structure of the flower, providing cross-pollination and preventing self-pollination. Insects also (primarily Hymenoptera) develop tools for a successful gathering of food (nectar, pollen) from the flowers of plants, such as converting of mouth appendages into licking-sucking machine, modifying of the front intestine into honey goiter, development on the body of tools to collect pollen (brush , basket), excellent development of the vision, sense of smell.

Proof of simultaneous development of plants and insects is the results of the studies of color vision of honey bees (Frisch), ultraviolet perception of bees (Kühn, Daumer), irregular reflection of ultraviolet rays by corolla (Daumer).

The major turning point in the evolution of bees, apparently, was the conversion of their ancestors from animal food to feeding on nectar and pollen and to the supply of offspring with these products.

As shown by many researchers bee ancestors went through a long series of complex transformations before it was possible the evolution of bees with their improved care for the offspring. Currently, the groups of Hymenoptera, from which the solitary bees originated, did not survive. However, as mentioned above, among the modern solitary bees there are representatives, who in their morphology and behavior are close to Sphecoid wasps (Collett, Prosopis), that is a proof of relationships with their ancestors.

The question of the origin of the social life of bees has a particular interest. All public bees parents (at least the mother) live with their descendants in the same nest and they have cooperation (building of nests, obtaining of food, care for the offspring, etc.).

We consider as valid the view that the bee and other communities have resulted from the gradual strengthening of contacts of parents with their descendants, and not from random clusters, observed among certain insects. In the vast majority of single bees species the mother-bee leaves the nest after the food supply of cells and oviposition. Further development of the offspring is completely independent: there is no contact between mother and the young generation. However, in one species of bees – Halictus quadricinctus – mother, after laying og eggs, does not fly at once, but sit in the nest, waiting for release of the offspring. In this case, there is a communication between parent and child. Young females of Halictus fly, mate with males and make their nests alone. The other kind of Halictus – Halictus malachurus have the beginnings of social life. Overwintered females stay together in the same nest, in which they lay their eggs. Around the middle of June the younger generation comes, consisting of  much smaller females than females-parents. Due to the strong differences from the parents, this generation was first identified as a separate species Halictus longulus. All Halictus longulus females are not able to mate, they rebuilt the new cells and collect pollen and nectar  with their parents to supply the new offspring. In August, there is a generation of large females and males malachurus. In autumn the old generation of malachurus females, all longulus females and males die and the young fertile malachurus females overwinter together.  In spring the life cycle is repeated. 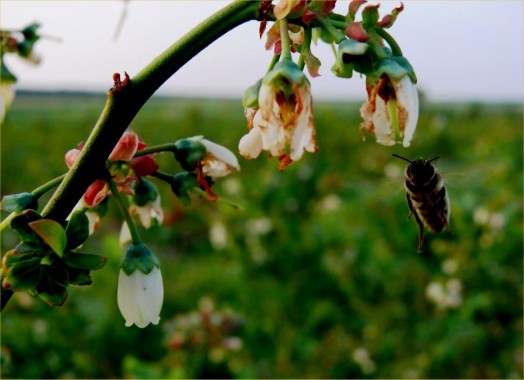 Generation of  longulus females, which are not able to mate and lay eggs, can be considered as working individuals in the community of Halictus malachurus. Consequently, in this case, there is the emergence of the social life of the bees in its initial phase, which shows some similarity to the features of bumble bees, when overwintered fetal female rebuilds a spring nest, flies for nectar and pollen, cares for offspring. The first generation of bumblebees are workers who are not able to mate and are responsible for the construction and protection of the nest, food gathering and brood care.

More primitive state of social structure were discovered in the other two species of bees in the family Halictus – Augochlorella. In spring one or more females perform all functions, including the collection of pollen. After hatching of the first generation there is only one egg-laying female. It can rebuild cells and guard the nest, but does not collect pollen. Other females although often copulate, but seldom lay eggs and perform all other functions. Queens and not laying eggs females differ in size but there is no distinct morphological differences between them. Consequently, these bees have social life in very primitive form.Honey bee is in all respects above Halictus and bumblebees. Despite the huge difference between them, the fact of the rudiments of social life in the group of single bees and the appearance of a number of phases of complication among the communities of insects (wasps, ants, social bees) are witnessing the possible evolution of social life to its highest level, on which are the modern community of honeybee and ants.

The evolution of the social life of bees was marked by increasing linkages between parent and child generations, led to separation of functions between them. In turn, the beginning of distinguishing between the functions of a mother and her descendants led to morphological differentiation, the isolation of the two forms of females and to a better implementation of each form of its characteristic features. 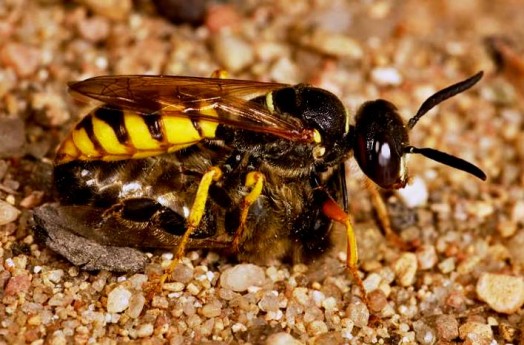 In close connection with the ongoing process of differentiation of forms there is a strengthening of the role of community of insects as a biological unit of higher order with respect to the members. In contrast, independent value of individuals belonging to the community, is being lost. The family structure of honeybee may serve to illustrate the highest stage, reached in the evolution of the social life of insects.

There is an economic importance of solitary bees as agents of cross-pollination of many plants, including such valuable crops such as red clover, alfalfa.

Especially noteworthy fact that certain types of solitary bees are more successful than the honey bee in the opening of alfalfa flowers .

Expanding of plowing reduces the nesting of solitary bees, but planting of shelter forest creates favorable conditions for the habitat of many solitary bees, including pollinators for alfalfa. Therefore, it is advisable to plant the alfalfa seeds around the southern and western forest edges, near ravines, gullies, ditches, slopes. You can also arrange suitable for solitary bees nesting sites such as ditches with compacted embankment, facing south, near alfalfa fields. Thus possible to increase the size of the species of solitary bees.