How nice to hear early spring dimensional, soothing hum of bees , darting from flower to flower in the bright sunshine! Charming little creatures … If they do not bite!

You may be surprised to learn that there are types of honey bees, which are safe in this aspect. This Australian stingless bees, which can be found in many parts of eastern Australia. These insects reach a length of not more than 4 millimeters. They are black with a fluffy white hairs on the head and on the sides. Many have tiny yellow spots on either side of the middle part of the abdomen.Along the coast, from the northern point of Queensland to southern New South Wales, you can find at least ten varieties of stingless bees. Some also live in the north of the tropical parts of the continent. 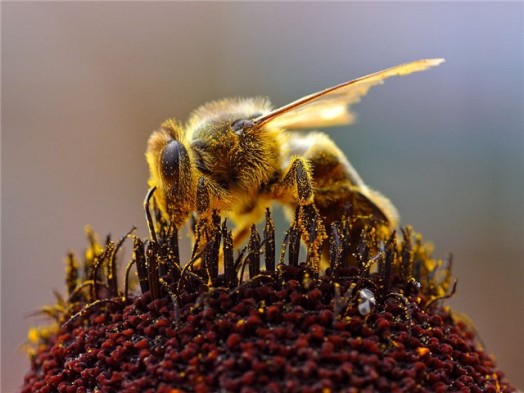 Imagine how these bees facilitate the work of honey collectors. One beekeeper said: “Working with other species of bees, I usually put on a grid and a hollow-necked sweater, but with these I do not need any protection. Five minutes after I open the hive, the bees still do their job, like I’m not here.” Hives of stingless bees are not like other bees. These hives are often called jacks. Honey and bee pollen stingless bees do not keep in regular hexagonal honeycombs, but their cells are cluster of oval barrels. Once the barrels are filled and hermetically corked, the bees build new ones on them and around them.

Let’s take a look inside the hive, which is home for about 15,000 stingless bees. It should, however, be warned: though these insects do not sting, they can pinch you with their mandibles or jaws. 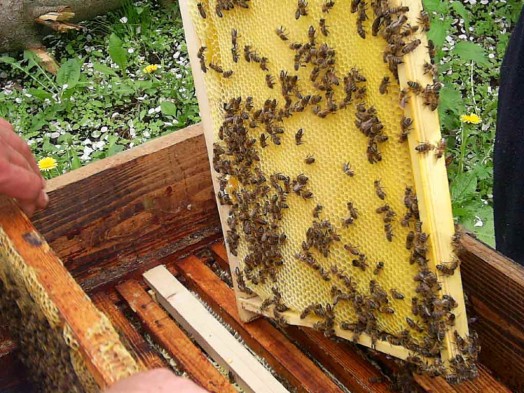 Intense activity can be seen along the corridor inside the hive. Bee family is a real solid team. Everyone knows where and what he needs to do.  Here we see a tiny bee, which, as if following some ideal blueprint, molds and polishes a new barrel of honey. Hardly a barrel is filled with honey, four other bees immediately seal it. The huge three-dimensional frame is a frame for barrels. Due to the unique engineering design of such a cell it can hold a large number of honey. Then we get into the next compartment of hive where we see the bee is much larger than all the rest. This is “Her Majesty” Queen! How glorious is her bright robe with black and gold stripes, surrounded by a retinue businesslike bees! Now the queen bee lays eggs in 60 prepared for her cells. Her movements are gentle and careful, like a mother, lying her baby in the crib. Notice how quickly after that worker bees clog cell. In just a few minutes – and it’s done!

When is hatched the offspring

Hatched from an egg, each larva eats the food supply, made for her in the cell. When a cell becomes too closely, the larva weaves a silken cocoon around itself. There she, passing pupal stage, eventually turns into a bee. Then she comes out of the cocoon and – after she somewhat is pampered by bees nanny – ready to work. And what happens to the wax cells? They are immediately collected and processed. Once the larva is born, the cocoon is no longer needed. If you leave the cocoon in the cell, it quickly will spam, so many cleaners of cells emit unnecessary garbage.

Many species of stingless bees produce special construction material containing wax, which they themselves generate, vegetable wax and resin. Bees need this material to create frames, consisting of pillars, beams and shear mounts, where all nodes are particularly strong. Building  the barrels of honey and pollen into a framework, bees fly into the barrels and make the desired shape. Then the contents of barrels are filled, hermetically closed and stored. Instinct tells bees, which plants are best to fly to and when, and at what time the weather is dangerous. It seems that they understand that survival is first necessary to stock up on food and save it.

Bees leave the hive to collect building materials, as well as nectar and pollen. In flight the bee is an experienced pilot and navigator. Besides, she knows what to collect and where. 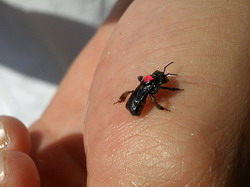 As the bee colony grows, the hive is filled to the limit of the tenants. What do they do then? Bee family is ordered: “You have to build a new house.” Sometimes one “scout” finds any suitable cavity for the new hive. Then “engineers” inspect the place.  Typically 30 to 50 of these “experts” in a few hours explore the inner surface of the cavity, as if measuring and marking something with ropes and sticks. Having determined that the foundation for a new home is good for them, they return to the nest, presumably to report the results of observations. Then, within 48 hours  “builders” arrive to a new place.  The “team” may be more than a thousand, but the queen is not included in it. They quickly set to work, bringing construction materials and food from the main hive. Before queen comes into a new home, bees must build a place for the brood and maintain the desired temperature – about 28 degrees Celsius (82 F). So the worker bees fashion a wall around the nest, as if wrapping its with blanket. It seems that the wise bees know that the eggs need warmth. Approximately after nine days the new queen, born in the old nest, comes into the new house. She immediately lays eggs. 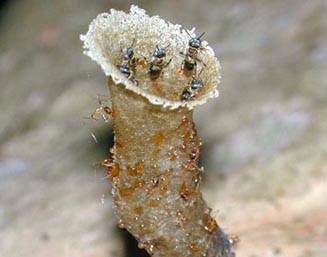 Gradually, these bees that are moved from the old to the new hive, die, and are replaced by younger ones. Over time, these bees also feel the need to build another new hive. This is how amazing the “mechanism” set in motion by our unrivaled Creator!