DANCING OF BEES is a message about the source of nectar and pollen, about a tree with propolis to seal cracks in the hive; about finding water sources or new location suitable for nest building. In the presence of abundant food of source the dancing mobilizes bee colony to work. 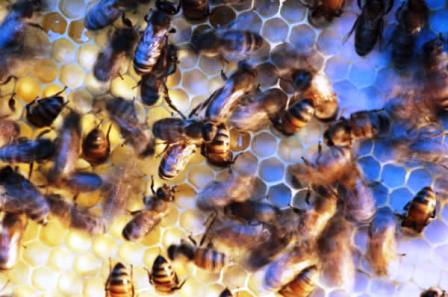 Bee scout, finding a rich source of nectar or pollen, dances on honeycombs, returning to the hive. Dancing is a kind of “language”, a signal by which bees learn the distance from the hive to the source of the nectar, the direction in which it is located, the kind of food.

There are two types of movements – circular and wags. Each dancing is fundamentally different from the other and carries important information. It should be said that the bees are always guided by the sun during the flight, and even on cloudy days they feel it. This is important, because the dancing bee scout must indicate the route to nectar relative to the sun.

During the flowering of many species of plants bees scouts search for those which are more filled with nectar. When scout detects a rich source of bribe – his dance is more energetic. Power of smell, the sweetness of nectar, brought by scout bee, determine the degree of mobilization of the family.

Bee scout, finding a new source of food, leaves a fragrant substance, secreted by glands on the tip of the abdomen, collects some nectar and flies in the hive. The fragrant helps to find it again.

Arriving in the hive, bee scout runs up into the honeycomb. Belching collected honey, it passes it to two or three bees.Freed from the nectar, it starts the dance. If the distance between the source of food and the hive does not exceed 100 meters, it makes a circle dance. It goes around a single cell with rapid mincing steps and then rotates 180° and runs in a circle in the opposite direction. It repeats several times this cycle movements. After that, the bee flies away to the place where it found the nectar, and bees follow and look for the source of the smell. If there is quite a lot of food, then they come back and make the same dance, attracting new bees.

Bees, visiting distant places with food source, take the waggle dance. It runs in a semicircle of several cells left, then runs in a straight line 2-3 cells to the starting point, and turning to the other side, makes the second semicircle and again returns to the starting point.Wagging may take several minutes. It differs from a circular dancing not only by a form, but also by the fact that at the straight path the bee produces quick wag motion with belly, uttering rustling, which greatly attracts the attention of other bees.

Bees, discovered the source of food, can specify the distance to it with wagging run.  During the dancing bee colony receives a signal about the direction to a source of food. Dancing can be made on horizontal or vertical surface, it is still indicates a direction in relation to the sun. Bee takes as a basis the angle between the direction of its flight and a straight line to the sun and shows it in the dance. If a straight run with wagging is directed vertically upwards, then you need to fly from the hive to the sun, and if the top down – against the sun. Straight-line running at an angle to the vertical line indicates the angle to the sun at which they need to fly. For example, a bee produces a waggle run at an angle of 60° to the left of the up direction, then food can be found at an angle of 60° to the left from the forward direction from the hive to the sun, etc.

Distance to the food the bee indicates with the speed and the amount of movement of the abdomen. The further the food, the slower the movement and a straight running with movements of the abdomen takes longer.

Unlike scout bees, which bring information about the location of bee plants, pollen foragers do not bring nectar to the hive, but deliver a small portion of pollen on pollen pants. They also perform circular and waggle dancing, reporting another pollen foragers about the distance and direction to the food source.