Bees have two pairs of wings and they are appendages of medium- and metathorax. Wings fully develop only in the transition from the bee pupa to an adult bee. They are laid in a bag-like rudiment of covers of the middle- and metathorax.

The pupa grows and this rudiment also does, its ventral and dorsal walls converge. The wing of the adult bee is a thin, elastic plate, with the veins, which are hardened pieces of hollow tubes.

During the formation of the wing hemolymph flows there, pulling wing plate.

Veins are mechanical support of a wing, they help to overcome air resistance in flight.There are different longitudinal veins, partially branching, and longitudinal cross-linking to each other. Between the veins the thin transparent membranes are stretched. Pattern of longitudinal and transverse veins is called venation. 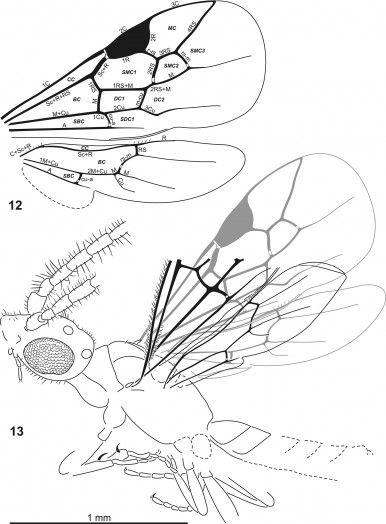 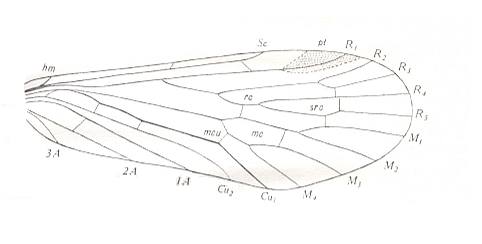 Costal vein, forming a thickened leading edge of the wing, goes from the shoulder blade, does not branch.

Subcostal vein is near the costal, in the middle of the wing merges with it. It also does not branch.

Medial, or median, vein, short, divided into two branches – the basement, connecting with subcostal, and discoidal.

Cubital vein starts from the middle vein and stretches along the wing almost to the end.

Radial vein is associated with cubital and three inter-cubital veins.

On the wings of bees there are also the following longitudinal veins: subdiscoidal, the first return, the second return.

The veins form on the wing  closed cells, which, as well as the veins have names: radial, cubital, discoidal. Their names are defined by the adjacent longitudinal veins. The cubital index helps to determine the breed of a bee, it is defined by a/b*100%, ie, the ratio of the length of a vein (a) of the third cubital cell to another vein (b). This feature is the same during all the year, is weakly correlated with the other conformation traits.

The rear wing has a similar structure, but it is much smaller than the front. In addition, the drones have additional rear wing venation.

The specifics of the rear wing venation reflects the individual characteristics of each queen, and hence the families of bees. Therefore, we can assume that the specific venation of a rear wing is a morphological sign in the determination of belonging to a particular group or line of the same breed of bees.

In contrast to worker bees, drones can have anomaly – a lot of hooks. There is an increase in the total number of hooks (27-36), the number of abnormal hooks on the wing ranges from 1 to 16.

There are also breed differences in the number of hooks. For example, the northern bees have fewer hooks than the south.

The junction of the wing to the body is a complex mechanism, which provides quick sweep of the wing and some turns during the sweep. In addition, the joint provides the folding. The wing is attached to the membrane. Place of the  attachment to the membrane is movable.

The column – piece of pleurite – plays the role of the support point for the wing. Outside of the colun is the long arm, from the place of attachment of the segment to the membrane to the column – the short arm. The moving of back leads to lifting. Swinging of wings is provided by the fact that the ends of the veins do not reach the edge of the wing.

Significant role in the articulation of the wings plays a series of plates, some axillary and intermediate. These plates reinforce the base of the wing, make them bend along outside lines and transfer of motion to the ends of the veins.

Flight of bees is very different from flight of birds, bee wings do not have muscles. Moreover, the wings of insects are similar to the wings of vertebrates, but not homologous. Unlike most birds, insects muscles are not attached to the wings, but to the walls of the body in such a way, that even slight changes in the form of thoracic move wings rapidly up and down.

The movement of the wings in flight is coordinated and directed primarily by muscle energy of indirect action, ie, muscles that are not connected to the wing. This group includes the dorsal longitudinal and vertical muscles. Reduction of vertical muscle pulls down tergite. As a result, the wings on the opposite side of the pivot point rise. With the reduction of longitudinal muscles the tergite arches, and the wing is lowered. Movement of the body wall is hardly noticeable, but since lever arms on both sides of the fulcrum of the wing have a different length, range of motion in the tips of the wings are hundreds of times more. The second group of muscles – the muscles of direct action, which provide turn of the wing along the longitudinal axis, and take it back and forth.

The main role during the flight is played by the indirect muscles. Chest cavity of a honeybee is entirely filled with them. There are two pair of them. The first pair is attached to the front and back frags of mesothorax. Reduction of these muscles leads to some convergence of frags in the segment by bending up and increase in its curvature. As a result, the base of the wing rises and the wing paddle part falls. The second pair of longitudinal dorsal muscles are considerably smaller than the first. It is stretched between the back frag and scutum. These muscles are also involved in the lowering of the wing. Consequently, the longitudinal muscles play a lowering role.

Another group of indirect muscles – the vertical muscles. They go from the back of the chest to chest sternite. In case of their reduction they draw back to the breast, so that is the rise of the wing paddle part.

Direct muscles are pleural muscles of front and back groups and axillary. Wing during flight turns along the longitudinal axis, and also have a back and forth.

Front pair of pleural muscles pulls costal edge down in case of their reduction, and the front edge of the wing, based on pleural column, falls down. Rear pair in case of reduction pulls the rear edge of the wing down, is also involved in the folding of a wing. Pleural muscles during flight create propeller effect. In addition, each wing can be seen as a kind of propeller. The motion of the wing during flight is characterized by a complex trajectory of the form of the number 8, the upper end is tilted back, during free movement forward this eight stretches and becomes a sine wave. Complex movements of the wings in flight are a combination of simpler movements up and down, back and forth, changing the slope. In this case, a bee makes a great number of vertical strokes of the wing. There are three types of flight of insects: gliding, parachuting and rowing. Bees like rowing flight. It is performed with the help of continuous rhythmic beats of its wings.