It is better to learn and catch bumble bees in nature during flowering of plants.

During flowering bumble bee long stays on the flower and, as a rule, does not notice a person. So to catch a bumblebee on the clover is not a problem. It’s best to do it with a glass lid. However, there are situations when the flowers are too high (lilac, willow, mountain ash, etc.). Using the standard butterfly net is uncomfortable (thick branches prevent rapid movements) and it constantly bites through the fabric, causing unnecessary inconvenience during the releasing from the net. So we tell you about special traps. 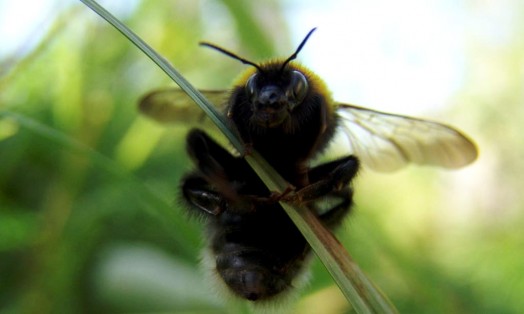 Its foundation is the wooden frame, in which is made the void. Spring-loaded flap closes the wide end of the cavity. The narrow end has a pipe, on which is placed firmly the plastic cup. Opening the door is made with borehole, which the researcher pulls. The trap is mounted on a long handle (about 2 m (6′)), which allows to get high branches. Assembling should be performed with the screws and bolts for greater reliability.The large trap-masher should be used for doors. Useful to make a detachable handle for easy transport. Process of catching: trap is carefully brought to a bumblebee and you slam the door. Bumblebee, being in the dark closed cavity tends to get out and moves on to the snow, falling at the same time right in the cup. When you only carefully remove the glass from the tube and close the lid. Then put a new glass, open the trap door and you are ready to catch the next bumblebee!