Ancient Roman legend tells that the nymph Nea, companion of the goddess Diana, trying to get rid of pesky claims of loving god Jupiter, committed suicide. For this, she was transformed into a beautiful tree with lush foliage, carved leaves, beautiful flowers and unusually tasty fruits, hidden in prickly boxes. Here we get the word «castanea» (Chestnut), casta (virgin) and Nea (name of the nymphs). 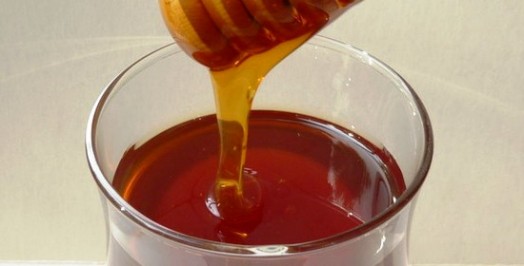 Seed chestnut (real, edible, noble), or as it is called sweet chestnut, belongs to the genus of Chestnut beech family. Homeland of a seed chestnut  – moist and warm Mediterranean. Precisely in dense blooms of the tree bees get the nectar from its flowers and make chestnut honey.

In Europe, the chestnut was brought by the ancient Romans from the Lydian kingdom, which was located in where is now Turkey. Then people realized that chestnut honey has priceless properties. It grows mainly in southern Europe, Minor Asia and the Caucasus, the variety –  American chestnut is in North America on the Atlantic coast. In Asia, you can find the Japanese chestnut, growing primarily in North Korea. 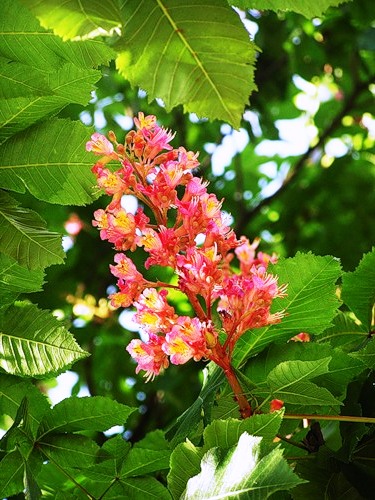 Chestnut is grown by planting nuts in the hole. First bloom is on the 7th year. It flowers in May and June, ripening in October and November. Chestnut grows 300 and even 500 years, and it is not the limit. On the slopes of the volcano Etna there is a famous survivor, according to various estimates – its age is two to four thousand years.

Long before the introduction of grain into the culture, people used chestnuts seeds in food, where crops grew poorly. Chestnuts are very tasty and nutritious, containing more than 10% of sugar and 60% of starch. Due to such a high content of carbohydrates and proteins – sweet, mealy fruits are very nutritious. You can eat raw, dried, roasted, and even bake bread from it’s flour.

In ancient times, chestnuts were part of the diet of the poor, but rich did not refuse, cooking from it special dishes. In the Middle Ages, the chestnuts were primary staple food, and on the Harvest Festival they were a symbol of prosperity and wealth. Over time, the number of trees decreased, and after the war, the rest were abandoned.

Nowadays chestnuts are back to the kitchen, they are no longer associated with poor diet, and, conversely, they are the pride and an integral part of the cuisine. They are especially popular in France, where the whole country celebrates the end of autumn with a chestnut. The greatest number of holidays, devoted to chestnut, is held in Italy. In early fall they prepare a variety of dishes, which include fragrant and sweet chestnuts: salads, soufflés, soups, pasta, pastries, desserts from ravioli and Ciacci (small spring rolls from chestnut flour) to brown cookies. And, of course, chestnut honey is necessarily at such festivals.

Chestnut, except nutritional value of fruit, during flowering is a wonderful and productive honey plant.

Among a variety of honey, chestnut raw unfiltered honey holds a high position. This honey is collected in the spring from white and pink bell-shaped flowers of the tree. Bees strenuously visit flowers of chestnut, that blooms 12 – 18 days in late spring or early summer.

Fragrant flowers of different chestnuts have curious feature:  colored spots catch the eye on the white petals of the flower.

Initially, they are yellow, then pass into the orange and finally become carmine red. Change the color of the spot  is accompanied by the change of smell coming from the flower. Interestingly, the special smell of a flower with a yellow spot – a signal for the presence of nectar. Flowers with red and orange spots bees do not visit. 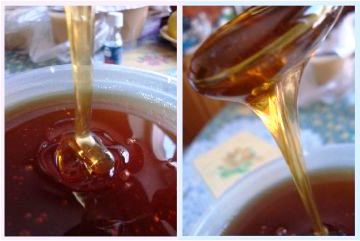 Dark and spicy with a hint of smoke and leather chestnut honey – a combination of sophistication and mystery. No two are alike. Many factors affect the color and odor, including the type of chestnut, the microclimate in which it grows, type of bees and even weather conditions (in a dry summer honey saturates).The darker the honey, the stronger the smell – this general rule is subject to chestnut honey, but its flavor is even more strong than in other types of honey.

Chestnut honey – it’s quite a specific product. It is very popular in Europe. For the French, this honey is the main and the most beloved.

Honey of this kind has dark brown color, both in liquid and in crystallized form, has a faint fragrance of flowers of chestnut. The taste of this unusual honey is sharp with bitterness, which disappears after heating.

It is good for those who do not like too sweet; due to bitter taste and strong flavor it is not suitable for sweetening, but amazing for flavoring, such as baking.

Chestnut honey has the following distinctive features. First, this sort of honey has weak tendency to crystallize. It crystallizes slowly, can remain liquid through the winter and in the spring turns into a dark brown mass. When the air temperature is 19-22 degrees Celsius (66 F), it remains liquid during the year. Secondly, its composition is extremely rich. It contains a great number of salts of manganese, copper, iron, fructose and vitamins of different groups. Amount of sucrose in this honey is much higher than its content in other honeys. And thirdly, chestnut honey is characterized by the following markers: acetophenone, giving the scent of mimosa and aminoacetophenone. Humidity of honey varies between 16 and 17.5%.

The relatively high cost of this kind of honey due to low volumes of production and rarity of the chestnut tree. Italy imports chestnut honey to many countries. 10 years ago on the other side of the Atlantic, it was impossible to find it, and now it is available in a wide range of online stores specializing in the sale of food.

In the middle latitudes you can find another kind of chestnut, it is called the horse chestnut tree. From the flowers of this tree bees collect nectar for rare varieties of honey, it quickly thickens, is colorless, transparent, almost has no smell. American chestnut honey is rich, but bitter. Although during the purchase of chestnut honey you must be careful, sometimes mix brown sugar with natural honey and sugar syrup or buckwheat honey are sold under its kind.

How useful is chestnut honey? 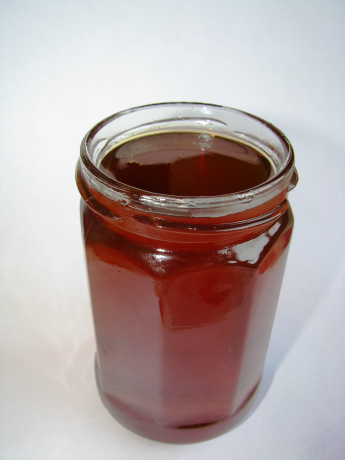 Due to its distinct taste and an unusual smell this honey belongs to the low-grade. But this does not diminish its healing properties. Rich in minerals and iron, vitamins B and C, chestnut honey helps with hoarseness, cough, bronchitis, sore throat, with purulent otitis media and sinusitis, prostatitis, colds.

Of all the varieties of honey, he has the most pronounced antimicrobial, antibacterial and antiseptic properties, and therefore applies not only inside but also outside in the treatment of wounds, ulcers and sore throat.

This honey is especially beneficial to the circulatory system and is recommended for cardiovascular diseases, is used in the treatment of thrombophlebitis and varicose veins, as regulates arterial and venous circulation and strengthens capillaries.

Chestnut honey is useful for gastrointestinal tract. Since it does not irritate the gastrointestinal mucosa, easily and quickly absorbed by the body, and has a low acidity, it is used in the treatment of ulcers of the stomach and intestine without surgery, urolithiasis and other kidney diseases. It stimulates the flow of bile and is recommended for stagnation in the liver.

Like all sorts of dark honey chestnut honey has antioxidant properties and is very useful for the prevention of cancer.

With nervousness, insomnia, hysteria and neurasthenia this honey is best, its regular use will not harm the human body like other drugs.

Like any natural honey, chestnut honey healing qualities are acquired in conjunction with the royal jelly.

Chestnut honey on the table

This variety of honey serves  many tables in Italy, France, Greece and Switzerland. It is a mandatory attribute of Italian breakfast. Why not to try this alternative: buy a jar of chestnut honey, cut a slice of bread, spread a thin layer of butter and lightly sprinkle the chestnut honey, that one could feel its flavor. Italians promise that it is the best breakfast you ever try, because gourmet chestnut honey has amazing properties.

Each province in Italy is convinced that their version of a combination of chestnut honey and other products carries all its charm and uniqueness, as well as emphasizes the dignity of related products.

Parma resident makes you to taste chestnut honey with ricotta, strachchino and other mature cheeses. In Tuscany it is served with thick meat dishes, or with a piece of Pecorino Toscano and fresh pears. Piedmontese has the best combination of chestnut honey with pungent blue cheese, such as gorgonzola cheese mountain.

Pleasant, saturated with little bitterness it’s great in baking, especially in the gingerbread, and it also goes well with yogurt and cream desserts. Italian housewives add it to ice cream. Benefits of chestnut honey are not reduced in the cooked dish.