Food for the bees are nectar and pollen from honey plants and polliniferous plants. Bees collect nectar through the proboscis, made up of almost all separated elongated segments. A longish piece of proboscis – tongue – ends with a spoon, fully equipped with longish thick hair. With the spoon bee can lick small droplets of nectar. The droplet rises to the throat by a thin (capillary) tube, located in the middle of the tongue. 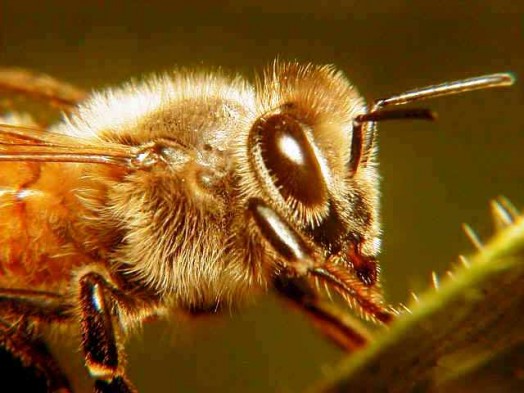 When the bee takes honey from the cell, it plunges proboscis deeper, and honey rises to the throat by not the capillary, but wider tube, formed by the other components of the proboscis. The bee makes sucking movement by muscles of the pharynx, accelerating feed collecting.

Nectar enters the longish narrow tube – esophagus, which runs from the head to the chest and to the abdomen, where, expanding, it forms honey goiter. Walls of honey goiter are stretched, so that it can hold up to 50-60 mg of water. Honey goiter can be compressed by the action of muscles that make up its walls. In the hive bee passes the brought nectar to bees or puts it in the cell. After honey goiter there is a midgut, which is the main organ that processes and assimilates food. Honey goiter is separated from the midgut with special crotch intestine. Perineum intestine consists of three parts – the head, valves and hoses. Head is inside honey goiter. It consists of four segments, committing continuous sucking movement till honey goiter is filled with fluid. Pollen grains, trapped in goiter with nectar, are captured and through the perineum intestine fall in the midgut. So the nectar, collected by the bee, is cleared of the pollen grains, which in large quantities are taken with nectar from the anther of a flowers. So honey, folded in the cell, is pure and transparent. Sleeve ща perineum intestine comes inside the midgut. By this sleeve food can come in small portions into intestine and move further along it. Bowel walls, sometimes wavy cutting, slowly push the food. It leaks from honey goiter into intestine, but it cannot get back into the honey goiter, because, under the pressure the sleeve, clinging to the wall of the gut, closes its own clearance. This ensures a constant purity of honey. Midgut has thick muscular walls, which form large transverse folds. Glandular cells of the intestine secrete digestive juices, which contain enzymes, decomposing not only the sugar and starch, but also protein and fat into the most common components. Pollen is digested mainly in the midgut, it is immediately enveloped by mucous gelatinous mass, containing digestive juices. This gelatinous sheath protects the delicate cells of the midgut from damage, also does not allow germs, entered the intestinal tract together with food, to leak to them. Pollen grains have a thick shell, which is not destroyed in the intestinal tract of bees. Digestive juices get inside a pollen grain through the holes (pores) in its shell. By the influence of enzymes the contents of pollen grains – starch, protein, fat – are dissolved and moved into the intestine. Dissolved food is absorbed in the back half of the midgut. Pollen grain shells and other substances stay, but  the water, in which is dissolved the food, is decomposed to the most common components, absorbed by the cells of intestine and its contents are sealed.  Narrow hindgut begins from the end of the midgut. In the place where the midgut becomes hindgut, ducts of so called Malpighian tubules begin. These vessels – thin tubes in the amount of 100-120 – are the organs of selection, much like the kidneys of animals. The cells of the blood vessels absorb from the surrounding blood the harmful decay products (uric acid, salt and other substances), which then are poured by the tube into a narrow hindgut and removed. Through the narrow hindgut the undigested remains of food together with the decay products fall into the large hindgut, a tank with folded walls, in which stool is accumulated during the winter. In the spring their quantity can achieve 35-40 mg (almost half the weight of the bee) without any harm to it. In the springtime, during the first flight bees clear intestinal tract. 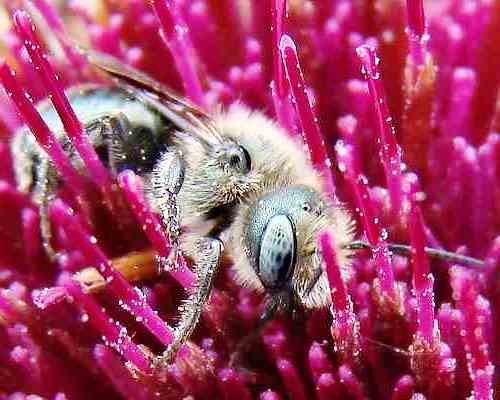 Inside the walls of the hindgut there are 6 rectal glands. With their help, the water is absorbed and stool is concentrated. These glands secrete substances, that inhibit the growth of rotten microbes. A queen, which traditionally does not fly out of the hive, lays stool on the cells, the bees clean it immediately. But after unfavorable winter, when the bees eat too much honey or when their function of  absorption is impaired in the midgut and hindgut,  bees can accumulate excess feces at the end of winter, which pollute the cells and walls of the hive. In such case a lot of bees die.