The drone bee appears in the bee family in the spring and summer. It is a male bee. You can easily distinguish drone from a working bee by a much larger size and the weight – about 0.2 g, which is twice more than the weight of the working bee. They do not participate in the collection of food and they cannot themselves even take food out of stocks, so they are fed by the worker bees. The drones do not perform any work, because their purpose is mating with the queen bee for fertilization of its eggs.

Usually it can be born a few thousand drones in the family in the spring and summer, but only 6-8 drones mate with the queen bee. The abundance of the drones in the family creates a greater saturation of drones in the air space and guarantees quick meeting of the queen with drones. It is important not only the meeting itself, but also, probably, a rivalry between the drones, which provides selective mating of the queen, that is, the pairing with the most advanced, powerful males, from which it can get viable posterity. Drones live about two months. Bees drive them out of the hive in the autumn, and by the winter there is no drones in the hive. And only in families with barren queens bees do not expel the drones, and they can stay in the winter. 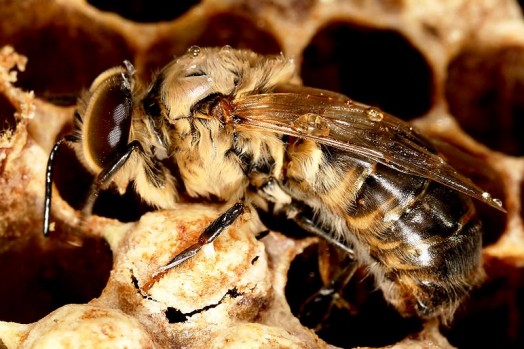 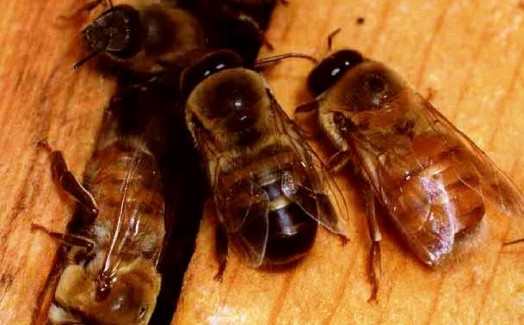 Drones do not stings, so they can not defend themselves or to kill or hurt anyone. They have smaller brain than the worker bees or queens. The only purpose of the drones is a queen insemination. In addition, their presence among the bees helps to regulate the temperature inside the nest. Each bee colony in the late spring (usually in the middle of May, and with good weather at the end of April) start to breed drones. This instinct is so exciting, that they rework honeycombs with bee cells in drone cells, and also build new drone combs in the nest. For feeding 1 kg drones they require 4800 g of honey and  3600 g of ambrosia. 1 kg is about 4,000 drones. According to a research, one drone eats on an average 4 mg of food per hour, and during the flight – 41 mg per hour. Drone spends in the nest 23 of 24 hours and 1 hour – in flight, spending 133 mg. Family spends 532 g of honey per day, or 30 pounds per month for 1 kg of drones. During three summer months 1 kg drones eat almost 0.5 centners of feed. It is clear that only tribal families need drones. 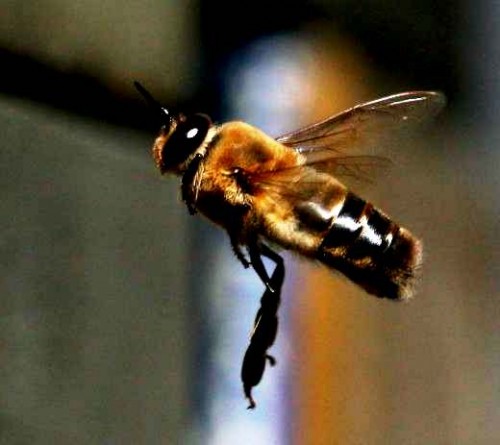 Drones reach sexual maturity at birth, but they are not able for mating, they need 10-14 days of training flights. Royal substance (pheromone) is a lure for drones, so it should be considered a hormone, but inside the hive and near the ground they do not respond to this smell. It starts to act on them at a height of 3 – 10 m (1-3′) from the ground.Drones, attracted by the smell of pheromones fly in the wind to reach the the queen. Muster of drones may be near the apiary, and can be removed from families at 7 km and more. 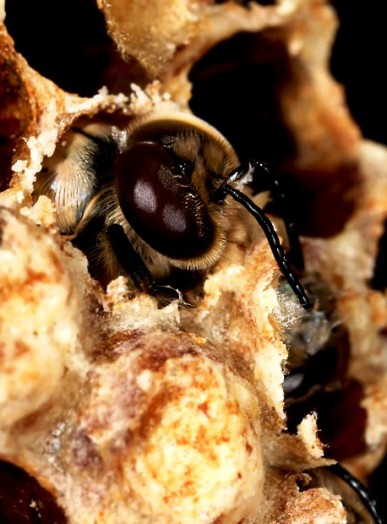 Experiments showed that drones flying out of the nest, take a supply of food for 40-67 km. They perfectly remember their hive, so they always come home, but if they get lost, any family acceptes them.

There are 2 – 3 thousand drones in the summer in the family. Bee family can breed more to the queen consume less time to meet with them. This in turn reduces the risk of meeting with its enemies (hornet, filant, birds). When there is a lot of drones, they fly over the queen, like a comet. The first drone, who reaches the queen, mates with it and instantly dies, and the uterus mates with the second, third, and so on. Part of drones die during the pursuit of the queen: they throw sex organ in the air and immediately die. When the queen ends pairing, it returns to the nest under the protection of bees. Approximately half of the young queens do not have time to  mate with drones on the first day, so on the second day a flight is repeated.

While building of the combs you should wax frames with full sheets of wax and give family 6 frames with honeycombs and 1 frame with the rudiments. Bees built drone honeycombs on this 1 frame and the queen lays eggs in the cells. After sealing drone cells some beekeepers cut the cells and lay it in solar extractors. Thus, the bees satisfy the instinct of construction of drone cells, and they reduce the number of mites in the family, in addition, the family lives without drones, saving food. But it is your choice.

In the fall, after a honey collection, bees do not only stop feeding the drones, but push them away from the open cells to the sealed honey. The drones can not open it, so they have to starve. After that, the bees begin to kick them out of the hive, and those that try to climb to notches, are killed and thrown away. If the drone falls into another hive in the summer, bees take it and in the fall – kill. If a family has drone brood, bees throw it in the fall.

If the bees expel the drones, then honey harvest is over, and there is the fetal queen in the hive. In many families, the drones sit on a migratory board, in other families bees go horseback on drones(go droneback))). Bees with no fetal queens do not expel the drones, but even take evicted from other hives. There have been cases, for example, when bees did not have time to kill the drones in time and killed them already in wintering boxes in the first week.