In North America pecans are considered an integral part of most food, and every family always uses pecans in holidays as well as on other days.

Even before the discovery of America by Columbus its original inhabitants – the Indians considered pecans almost a staple food, which helps to survive in any environment – because hunting was not always successful, and to preserve meat in store – a difficult task. And pecans could be collected, stored for future use, they could keep it for a long time and not to be afraid that they will be spoiled: their strong shell – is a reliable tight natural packaging that protects the contents from any harmful effects and pests. Also, they could barter it for necessary food or other goods. 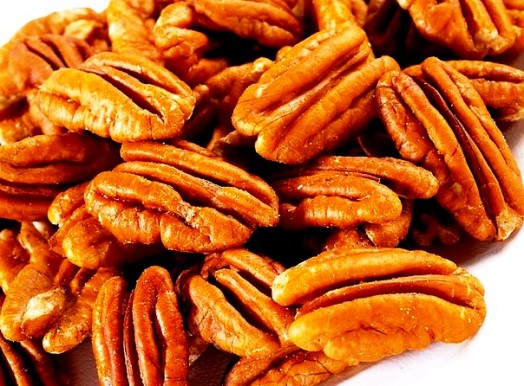 Indians even engaged in their selection: moving to the continent, they made camps, villages, and always planted pecan trees around. The nuts usually appear quickly – in 7-8 years, and the Indians selected the best – with a thin shell and large nut inside.

They prepared energetically valuable and nutritious milk: ground it in a mortar with pestle and thoroughly mixed with the water to form a soft whey.  They fed children, adolescents, elderly and sick people – it helped to grow and flourish for first ones, and returned strength and health to others.

Contemporary followers of healthy eating also should eat them, but only fresh nuts are suitable for this purpose.

What are the pecans, and what is their uniqueness and usefulness?

By appearance they resemble hazelnut or olives – they are called “olive nuts”. Peeled pecans are very similar to walnuts – they have nearly the same form – the “brain cells”. By taste they are also like walnuts, but softer, more tender and tastier.

The inside of the shell there is almost no walls – so they are easy to peel and they have no bitterness as some walnuts,at the base of nut   there is no soft layer, and it is completely closed.

These features make them so unique: unlike other nuts, they are not prone to pest attacks.

These nuts also can not be rancid, until they are unpeeled – the air does not get inside.

If pecans are well matured, and were then dried properly, then they will have no astringent taste like walnuts. Pecans have a very pleasant and sweet taste.

On average pecan weighs as much as a large walnut, but its core is significantly more – sometimes even 2 times.

Nutritional value of pecans is amazing: they have more calories than walnuts, and they have more sugar, fats in which more than 70%, carbohydrates – about 15%, 10 – 15% of protein, 5% of water and ash.

Pecans are rich in vitamins of A, E and B group – particularly folic acid, calcium and magnesium, phosphorus, zinc and potassium.

For adult man is enough about 400 g pecans per day in order to satisfy the body’s need in calories and many nutrients – knowingly Indian hunters were so strong, fast and durable.

Kernels are rich in monounsaturated fats, and gamma-tocopherol – a substance that protects against oxidation of proteins, fats, and even DNA.

Nuts and oil extracted from them have many medicinal properties. Therapeutic oil can be obtained only by cold pressing – it preserves all nutrients. Oil turns golden-yellow, with a slight odor of nuts, and is very pleasant by taste – a bit like olive oil. Everything valuable in nuts remains in the oil, but in a more concentrated state: saturated and unsaturated fatty acids, minerals, vitamins, and phytosterols – natural biologically active substances contained in plants, nuts and seeds. These substances are able to improve the condition of the heart and blood vessels, reducing the number of “bad” cholesterol in the blood and prevent the development of atherosclerosis, varicose veins, coronary heart disease.

Pecan oil is recommended by experts, both for internal and for external use. It helps to prevent and treat almost all colds, reduces headaches, fatigue, improves appetite, replaces almost all the fat and actively fights aging.

Pecans and oil are very useful for elderly and impaired people, their use also strengthens the immune system and protects cells from the effects of carcinogens.

As an external agent oil is used in cosmetics and for skin problems: irritation, sunburn, fungal infections, insect bites, reduction and removal of hematoma.

Oil is often used as a massage for skin care: it hydrates the skin, making it supple, helps cell renewal, refreshes and rejuvenates. It is also included in cosmetic products designed for all skin types, but especially suitable for dry and mature skin.

And of course, the versatility of pecans allows to use them widely in the culinary arts: they can be used raw, dried, fried, can be added to various dishes, cakes and even for making elite liquors, honey roasted pecans.

In the U.S. there is no big celebration without pecan cake.

You can get coffee with extraordinary, delicious taste, if grind cores with pecans, then boil, let stand a bit and add a little orange extract.

Today, pecans are grown not only in America but also in Australia, Asia, the Black Sea coast, so to buy them more easily.

Pecans are selling fresh – cleaned and in the shell, hardened, vacuum packaging and bags. Of course, it is better to buy nuts in the shell, and eat them immediately after peeling.

Dry unpeeled nuts can be stored for over six months, and it is better to freeze peeled, otherwise they quickly become bitter because they have a lot of fat.

Can I use pecans as a part of a weight loss diet, or better to refrain from their use, if there is a tendency to excess weight? It all depends on how we use nuts – much like in the case of peanut diet .

If you eat pecans little and often, replacing fat and high-calorie foods, they will help to lose weight, reducing the level of cholesterol in the blood. But if you mix them with the wrong food – especially meat and milk, then the result will be the opposite – pecan have more calories than other nuts.

Contraindications to the use of pecans

There is no specific contraindications to the use of pecans and oil, except for allergic reactions or fatty liver.

Otherwise they are very useful, but keep in mind that you should not eat more than 100 grams of nuts at a time – the body simply can not master them, but you can easily disrupt digestion.

Milkshake with honey and pecans

For this recipe you will need: 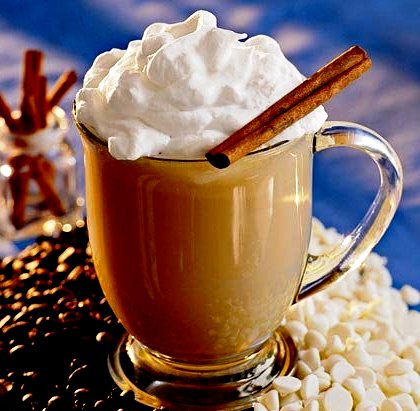 Put a glass in refrigerator. Mix in a blender 100 ml of milk, three scoops of vanilla ice cream, 1 tablespoon of honey and 2 tablespoons of finely chopped pecans.

Drizzle liquid honey on a cold glass (this can be done easily from the bottle), pour a cocktail. Sprinkle with cinnamon and garnish with pecans. 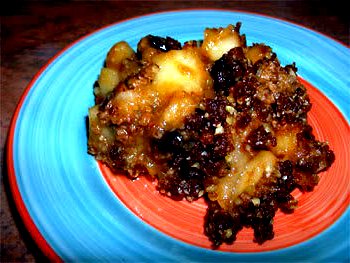 1 cup of pecans or walnuts

1 tsp. of ground pods of vanilla.
Chop 2 pears and other ingredients of cobbler in a food processor. Pour into a shape (flat shape with sides).

The remaining 4 pear you peel, cut “non-small”, mix with pear “sauce”.
Grind crumble in a food processor and sprinkle on pears. 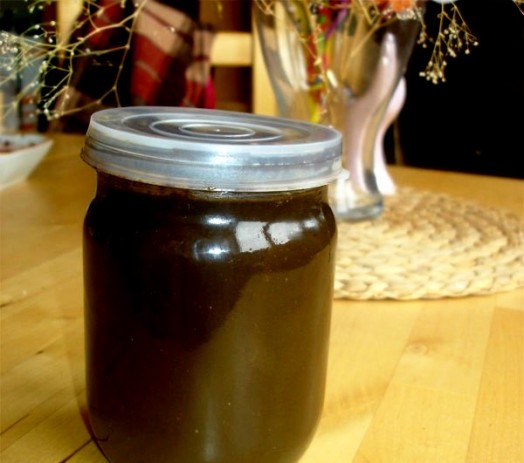 For information: for many centuries urbech is cooked in the traditional way from natural nuts and seeds – they are ground in a special stone mill. Squeezed seed gives oil contained in it, making urbech tart, thick and very nutritious.
Harsh Dagestan mountaineers used to take urbech to their distant campaigns – it is perfectly toned and energetic. It is a great addition to breakfast – add it to oatmeal, mix with honey, smear on bread and get energy and power (which is especially useful in the morning).
It is better to cook something and to comprehend the mystery of the East in practice.
By this theory to hold off until the new issue, and bring to your attention

We need:
6 tsp. of tahini
1/2 cup of honey
1/2 tsp. of cinnamon
1 cup of rolled oats
Add all ingredients to your taste, experiment with their proportions.
Mix together the Tahini, honey with cinnamon, then stir the oats. Create cookies and put them in the fridge – so they harden.
Promised two versions of this cookie:
For the version with maple syrup and pecans add 2 tablespoons of maple syrup and about 1/2 cup of pecans.
For the version with raisins and cinnamon add more cinnamon (to your taste), 1/4 cup of hazelnuts and 1/2 cup of raisins. 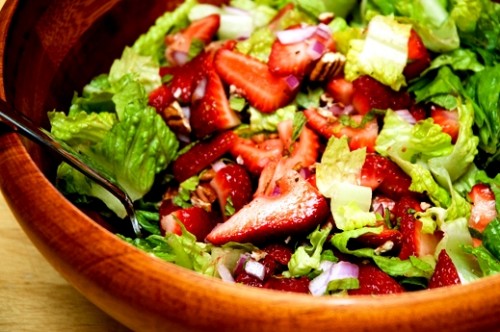