Honey is a very valuable food product produced by honey bees from the nectar, honeydew or sugary juices of plants and trees.It has a characteristic light aroma and taste that make it a unique product. Honey – this is the product of plant-animal origin with the richest contain of microelements. It is composed of magnesium, iron, chlorine, copper, lead, calcium, phosphorus, sulfur, and other macro-and micronutrients. Almost all scholars who have studied sugar free honey, argue that the dark variety of honey contains more minerals. But honey calorie is independent of color or variety of honey and is 3280 kcal/kg. 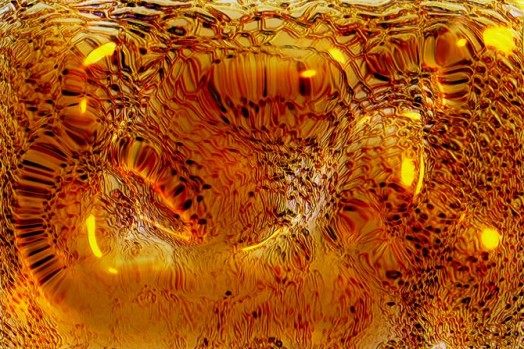 Caloric content of honey and fitness. What to choose?

People who are watching their figures, worry that a teaspoon of honey contains 22 kcal. But these calories have power! People who took part in the experiment of University of California, consumed honey for a month and did not gain excess weight. The researchers noted that the volunteers experienced a feeling of fullness more quickly, and they have decreased craving for sweets.

Despite the fact that caloric content of honey is more than sugar, people should still give preference to the first product. The fact that there is a concept of glycemic index (GI). This is an indicator of the speed with which the product is splitted in the body and converted into glucose. Indices of all the products were compared with glucose,  which GI is 100. The higher GI product you have eaten, the more intense your pancreas secretes insulin, which has two main functions in the body. The first function is the reduction of blood sugar and converting it in the form of fat for a “rainy day”, and the second – delaying of the mechanism of transformation of deferred by the body fat into glucose. That is, the higher the GI, the greater the chance of getting those extra pounds. From this point of view it is better honey than sugar because their GI 55 and 61 respectively.

Unlike honey the sugar has no minerals and vitamins (for good reason it is called “empty calories”). They use reserves of the body. When these stocks are depleted,  process of  metabolization of the “bad” cholesterol and fatty acids starts, increasing cholesterol levels and ultimately causing obesity. Therefore, the conclusion is that if you think about your weight, honey – a reasonable choice.

But these one hundred grams is difficult to eat for a day, or even two, during a rational balanced diet. You can substitute a tablespoon of sugar with honey, it is quickly absorbed into the blood, and this will give you an immediate force. Let honey calorie do not scare you. Eat it for health and do not be afraid that you will get fat.

Replacing sugar with honey, you add health. The famous Roman physician Claudius Galen wrote that honey – a universal remedy for all diseases.These conclusions he did a century ago, but now they will not be questioned. Honey – a natural product and a great source of energy.

When it comes to choose between honey and sugar, it must be admitted that both contain a lot of carbohydrates. Both products contain glucose and fructose. However, in sugar during the industrial processes the organic acids, protein, nitrogen elements, enzymes are destroyed, while the honey, a natural sweetener, keeps all the useful elements. Also, honey has antioxidant and antimicrobial properties, which sugar does not have.

It is known the anticarious effect of honey. Volunteers were given 0.5 grams of honey and asked to keep it into the mouth, wait for 4 minutes and rinse. Saliva samples of volunteers were selected before and after taking the honey. The researchers found that despite the fact that honey contains about 70% sugar, taken in high concentrations it has anticarious effect. 10 minutes after rinsing of the mouth it was observed 70% reduction in the number of bacteria that cause tooth decay.

You might want to use the recipes with honey and make a marinade for meat. Well, honey will give a golden brown crust and glow to your pork, while reducing the formation of carcinogens during baking and frying. One kind of carcinogens, called heterocyclic aromatic amine (HAA), is formed when meat at high temperature starts to burn. Now, researchers at the University of Michigan said that if the meat is soaked for 4 hours in 30% honey marinade, then the formation of the HAA is significantly reduced by antioxidants of honey.

Speaking of antioxidants. They are contained in many foods, so you can safely combine these honey properties with tonic and antioxidant properties of green tea. Caloric content of tea with honey is low, and the benefits are enormous.

We would like to reassure diabetics: honey, and sugar cause lower glycemic response than starchy foods, such as the white bread. When we talk about the level of glucose in the blood, then the total amount of carbohydrates is more important than the type of carbohydrate. Therefore, experts say that diabetics can afford a modest amount of “simple sugars” in a balanced diet. But this does not mean that you can eat only honey and thrown out of the fridge boring vegetables. A spoon of honey does not contain all the necessary nutrients in the right quantity.They are available, but you have to eat a lot more honey than the recommended daily allowance. And remember that the teaspoon of honey has 22 kcal. And the extra calories we do not need.

So, what are the advantages and benefits of honey for our health: 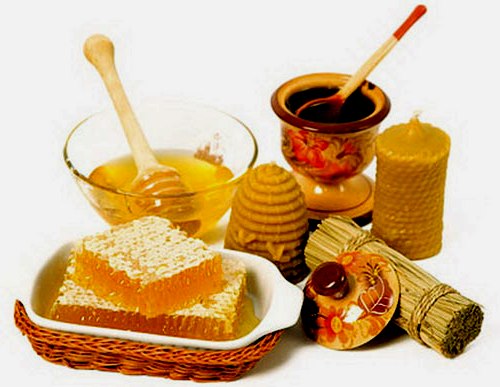 – Honey contains enzymes such as diastase, invertase, catalase, peroxidase, lipase, occupying one of the first places among the food by their content, having positive effects on the digestive process;

– Sugar creates an additional burden on the liver and can result in fatty degeneration;

– Sugar creates favorable conditions for the development of pathogens in the gut, making it difficult for the production of lactic acid, the gastrointestinal tract, which has bacteriostatic properties, honey, on the contrary, does not allow to get the agents into the digestive tract;

– Honey – is an effective remedy for various respiratory diseases;

– And honey, no doubt, is one of the most important sources of vitamins, minerals and organic acids, which sugar does not have. 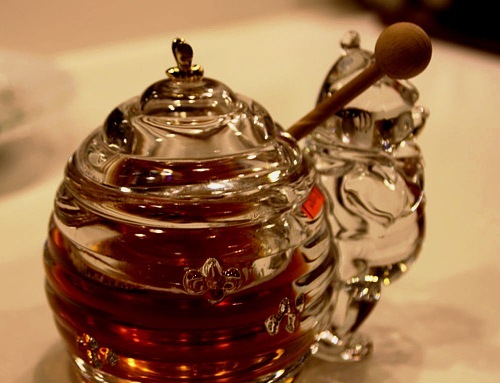 Caloric content of honey and sugar. Who will win in the kitchen?

We have already said that the calorie content in a teaspoon of honey is 22 kcal. For comparison, calorie content of sugar in the same spoon – 16 kcal. Because of the high fructose content the honey is sweeter than sugar. Comparing calorie content of honey and sugar, we see that the first one has more calories, but in fact we eat less. As a result, we consume fewer calories. And in the long run, although honey is more expensive than sugar, it will be more economical. The common ratio for replacing sugar with honey in the recipe is: 1/2 part of honey to 2/3 part of sugar.

Replace the sugar with honey, beginning from the half rate of sugar needed for the dish. In some recipes, the sugar can be replaced completely. Honey even has the ability to absorb and retain moisture, this will not allow your baking to dry out, while guaranteeing golden crust. Honey gives dishes a special sweet smell. Do not be afraid to experiment. Honey blends perfectly with toast and bagels. Add honey to drink, such as tea, coffee or milk. Caloric content of tea with honey will not hurt you. But a glass of iced tea, a teaspoon of honey and lemon slice relieve you from thirst and quickly restore power. And do not forget honey lovers catchphrase: “Eat honey with a spoon, straight from the can”. There is such a diversity of species and varieties of honey, that the process of learning of the uniqueness of each species, its taste, flavor and benefits can turn into art.