Truffle (Tuberales) is marsupial genus of fungi – ascomycetes (Ascomycetes) class of higher fungi with special organs of reproduction – bags. Truffle can be found in relatively warm regions of the temperate zones of both hemispheres. They belong to the so-called underground (hypogean) Ascomycetes, living in symbiosis with the roots of trees, they have underground fruiting bodies. Their shape – round or tuberous, consistency – fleshy or gristly, size – from a pea to a large potato tuber, and even bigger, and the weight can sometimes be up to 1 kg . The shape resembles a tuber with bark. 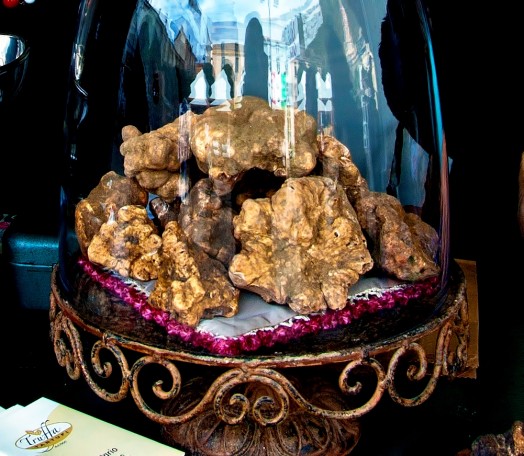 Truffle consists of water, fiber, minerals (obtained from tree roots). The scientific name of the truffle – tuber magnatum pico, better known as the white truffle from Alba, mentioned from the era of the Roman Empire. Truffle from Alba is the best truffle, it grows in the area of Langhe, Roero, Monferrato. In Italy, there are other areas where it grows, but it is not such tasty as Piedmontese. Truffle is exquisite, precious, niche product, is widely used in Italian cooking (especially in Piedmont). Small amount of the product is enough to give a distinctive flavor to the dish. But pleasure is expensive. At the annual auction the price of it reaches 330 000 USD. 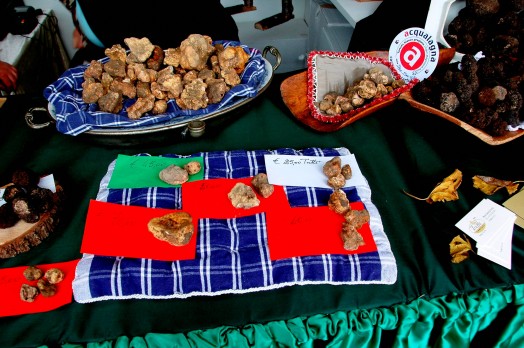 White truffles are yellow, ocher, white in cutting. It ripens from early October to late December. White truffles, unlike blacks, are more expensive and are found primarily in the Northern Italy – Piedmont, Tuscany, Emilia-Romagna. White truffle grows in deciduous, coniferous and mixed forests on moderately moist, well-warmed soil with an under-developed herbaceous cover. You can find them in aspen, birch forests, under hazel bushes and in young stands of pine and spruce in August – September. Fruit body has the shape of potato tuber. Truffle is large, up to 500 grams or more. Young truffle is coated with smooth skin of whitish color. With age it gets a light brown color with yellow, and folds, cracks, bumps appear on the surface. The flesh of the fungus is dry, the cut is initially white, then gray-white with a yellowish-brown wavy streaks, there are bags with spores. It has a pleasant smell. White truffle grows underground at a depth of 8-10 cm (4”). It appears very rarely on the surface. Therefore, the fungus is very difficult to detect.Its location can only be guessed by a barely noticeable bumps, usually devoid of vegetation. 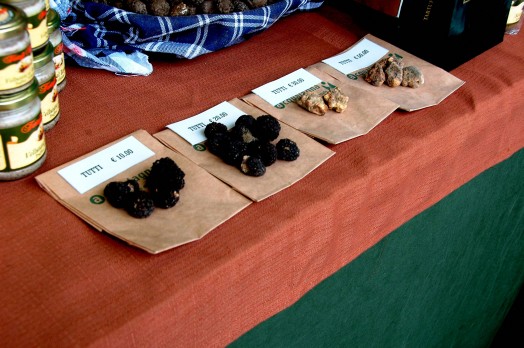 Truffle “Bianchetto” (Tuber Borchii Vitt. o Tuber Albidum Pico) Externally, it is a bit like white truffle, but the taste and aroma is inferior. The scent has light acidity. Ripens from January 15 to April 30.

Color, flavor and aroma characteristics of fungus depend on the neighboring tree. If it grows up under a linden – it is light and has a slight odor. Form of truffle depends on soil type. If the ground is soft, truffle has a smooth, round surface, if the soil is heavy, clay – it is knotty, covered with nodules, due to the fact that it is difficult to get a place in space. Unlike other fungi, truffles hardly grow artificially, hence they have the high price and demand. During ancient times, people considered white truffle the food of the gods, Jupiter aphrodisiac, the Romans prepared it in ash and eat with the honey. These fungi were endowed with extraordinary healing properties – they return lost youth, and give power.  Also they believed that the truffle grows in lightning struck places. In the Middle Ages people were afraid to eat them because of the strange shape, thinking it was a poison. Only in the last two centuries, the truffle was the discovery of the royal chefs. Louis XIV made it a constant dish on the royal table, many authors told about it: Alexandre Dumas with the slogan “inner sanctum cooking”, George Sand – “enchanting apples”, Charles Gounod “negro kings” and others. A. and C. Golon’s write in novel “Angelica” “You should know the truffle has a divine, magical properties. Only this dish makes the bride to accept husband’s expression of his feelings. Truffle gives ardor, improves blood circulation and makes the skin sensitive”. Truffles are the fungi with high taste, you can fry, boil, braise and dry them. They are famous in sauces and seasonings. 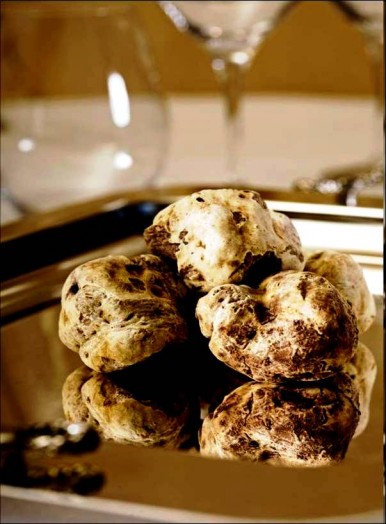 In contrast to other fungi, the super-expensive and super-rare truffles, like people, are divided into male and female, and reproduce only by sexual way. And they have a tendency to sexual separatism: if you take a separate colony of truffles, you will find that it consists entirely of either males or entirely of females. Because of this they reproduce poorly. According to the latest scientific data, truffles emit pheromones. Volatile substances by inhalation get to the area of the brain, responsible for emotion and sensuality. It has long been considered as a powerful aphrodisiacs. Calorie content is 24.0 kcal.

During Louis truffles were served boiled and undressed, decorated with fresh flowers. Today they are used in almost all dishes: fish, meat, soups, salads, sauces, even desserts. Each of them only has a truffle flavor, but for some people this fragrance, hovering over the plate, is sufficient for happiness. Keep the flavor during cooking is the main difficulty. That’s why truffles are added to the dish in the end, and often raw. They are sliced finely, using, of course, a special blade. 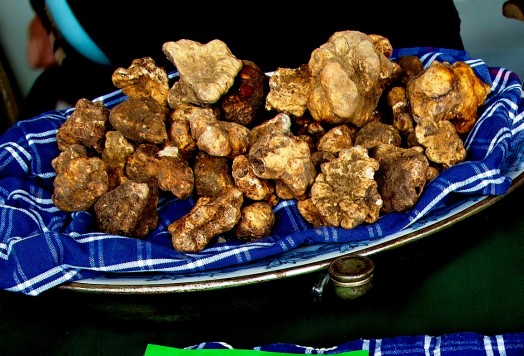 How to choose? Each type of truffle has its season. White ones – from October to January, black truffles – from December to March, in the winter – simpler and inexpensive, and since May – summer truffles – black and dark yellow. They are all very different in quality and price, the white truffle is more expensive than the black one. But one dish needs just a few grams of the fungus. Truffles are stored only 7 to 10 days. White truffle is and is very picky about storage conditions. Ideal conditions for the storage is the same area where truffle grows, cool temperature (5-10 degrees C) (50 F), away from sunlight. What you can try with this wonderful fungus? For example, eggs. Or raw beef, chopped with a knife or veal meat (raw!), olive oil and salt, with fondue (melted Fontina cheese), with egg noodles and butter, with a simple risotto with cheese (you can try to simply boil rice, fill it with butter or olive oil and slices of truffle).

And this (left to right) –  white truffle with honey, truffle salt, pickled and black truffle juice. Honey has a very strange taste, but interesting. 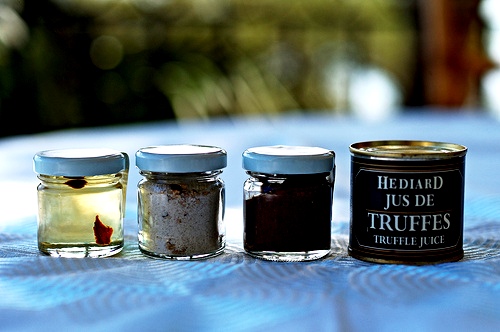